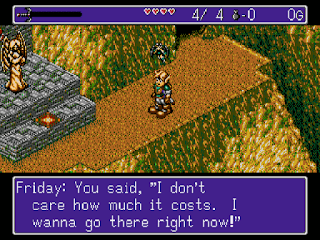 Genre: Action
Perspective: Bird's-eye view
Visual: 2D scrolling, Isometric
Gameplay: Platform, Puzzle elements, RPG elements
Art: Anime / Manga
Published by: SEGA of America
Developed by: Climax Entertainment
Released: 1993
Platform: SEGA Genesis / Mega Drive
You are a Landstalker named NIGEL - a "hunter" for values. Last is your "prey" statue of JYPTA. Which you found in the ruins of the city of Jypta. At the time when you sell the statue for 2000 GOLD, unexpectedly appears a forest nymph - FRIDAY. She suggests you go in search of the legendary treasures of King NOLE. Then there is a blonde KAYLA with two henchmen: INK and WALLY; And requires to give her FRIDAY. The nymph is trying to persuade you not to give her away. She promises to take you to a place where treasures are hidden. You agree with her offer and flee from KAYLA. On a large bird you cross to the island, where, according to legend, hidden treasures. For the bird, you give all the money you have. From this place your adventures begin.

RESIDENTIAL HOUSES - here you can learn about the path of your journey, sometimes get a useful object.
TEMPLE - there are 4 books here:
Awakening Book - for the treatment of hallucinations
Anti Curse - describes various curses
Detox Book - describes poisons and antidotes
Record Book - a book for recording the game.
In order to use the function of the book, put it on the table in front of Priest'o.
HOTEL - for a fee you can spend the night, thereby completely recovering energy. You can also see the map (for free). To do this, place a card or register book on the rack with lnnkeeper.
STORE - you can buy food, medicine and other useful items.

Gold is gold, money.
Life Stock - increases the level of your hero's vital energy by one unit.
Golden Statue - gives for a time the full magic of the sword. Statue of Gaia - earthquake.
Key is the key.
Idol Stone - the key to the cave Swamp Shrine.
Safety Pass - pass to MERCATOR
Bell - the bell; Rings where Life Stock is located.
Buyer Card - a pass to the drug store in the port of MERCATOR'a.
Blue Ribbon - a blue bow, does not play a role.
Armlet is the "key" to the MIR's tower.
Garlic - garlic, is used to communicate with your MIRO double.
Moz Whistle - whistle, allows you to understand the conversation of dogs.
Sun Stone - a sun stone, the basis of the lighthouse in the city of RYUMA.
Ax Magic - a magic ax, cuts down some spruce.
Lantern - the lantern.
Lithograph - a map in the form of God Gola. Indicates the cities in which there are five stones (Jevels).
Red Jevel, Purple Jevel - the stones that open the teleporter, leading to the underground city.
Gola's Eye - opens the teleporter, forwarding to the cave, in which there is a teleporter, leading to the underground city.
Gola's Nail, Gola's Fang, Gola's Horn - three elements of Gola teleporting to King NOLE.

During the game you can find different types of equipment. There are only four of them: swords, bibs, rings with stones and boots. Swords:
Sword - simple sword;
Magic Sword - a magic sword, the full magic of which burns the enemy;
Thunder Sword - sword-thunder, full magic beats an electric discharge;
Sword of Ice - sword-ice, full magic - this loach, which flies out of the sword and freezes the enemy for a short time;
Sword of Gaia - sword of the goddess GAIA, his full magic causes an earthquake.

Boots are simple;
Healing Boots - restoring vital energy;
Flame Boots - protect against burning hot lava;
Iron Boots - protect from spikes on the floor;
Snow Spiked Boots - let you walk on the snow.
Breastplates also have five types, each of which protects you more or less from the blows of enemies.
Rings with stones: first you only have a glove, but during the game you will find four rings: Saturn Stone, Mars Stone, Moon Stone and Venus Stone. Rings increase the power of the sword and accelerate the restoration of sword magic.

In the caves, to open some doors, you will need the keys, or if the door looks like a lattice, you need to press a button, and, perhaps, kill some monsters, otherwise this door is simply an exit from the room. Some monsters can be used as a stepping stone to reach the next area of the cave. In cases with difficult jumps, change the direction of the joystick cursor during the jump. Puzzles in caves are easily solved if you carefully analyze objects in the room and monsters (for example, some idols can be buttons). Sometimes it's best to leave the monsters alive so they click on the desired button. Also do not forget to replenish food and medicine supplies in a timely manner.
‹
›
Home
View web version