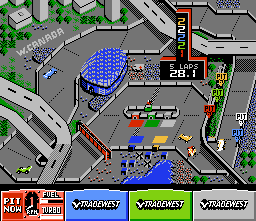 Genre: Action, Racing / Driving
Perspective: Top-down
Visual: Fixed / Flip-screen
Published by: Tradewest
Developed by: Leland Corporation
Released: 1991
Platform: Nintendo (NES)
"Danny Sullivan's Indy Heat" - a racing game with a top view, produced by "Rare Ltd." And published "Tradewest" for NES in the US and Europe in 1992.
I am a fan of racing cars ... and just a big fan of high-speed transport, whether Indy-cars, cars, trucks or even "monsters" on giant wheels. And I like the game "Danny Sullivan's Indy Heat". I did not think that there would be such an NES! During the reign of the console, we were offered either a defective 3D, cheap type of which did not allow us to fully feel the spirit of the race, or a more or less acceptable view from above.
In the gameplay there is no special wisdom, just hold a certain button, moving in the "non-stop" mode, and turn where it is needed. Before the next route you can improve the car: change the engine and other accessories needed to win the race. Each time rivalry becomes more and more complicated and complicated. The more thirst for victory, the more fun it is to play!
The graphics are very nice for 8-rolls: everything looks pretty, whether it's cars, stands, flagships or something else. Maybe I'm pretty good at this game, because it's not the best I've ever seen in the gaming industry. But among other games for NES, it still looks damn good!
As for the sound ... Given that this is a game for the NES, you'll have to wonder ... Do you really want to hear the plausible roar of the engines? Of course not! Prefix this does not allow! Fortunately, "Rare Ltd." probably took this into account, and endowed the game with very memorable melodies to compensate for the lack of real sounds of the "engine" of our cars. All the tracks in "Danny Sullivan's Indy Heat" are unique, and you do not find any repetitive motifs in it. The sound is good enough to listen to it without growing irritation and without the desire to press Mute on the TV panel.
If you are still a happy owner of the console, I advise you to buy this game in the form of a cartridge. This is a very good fun for everyone, especially if you have three friends, also passionate about racing, like me. Ah, those warm memories! "Danny Sullivan's Indy Heat" helps me remember the good old days of my gaming youth, it's a damn good racing game, which definitely takes place in the top ten or even the top five of my favorite games on NES.
‹
›
Home
View web version