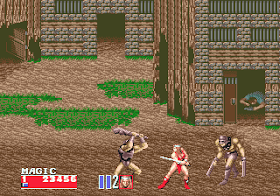 Genre: Action
Perspective: Side view
Visual: 2D scrolling
Gameplay: Beat 'em up / Brawler
Setting: Fantasy
Published by: SEGA of America
Developed by: SEGA Enterprises Ltd.
Released: 1991
Platform: SEGA Genesis / Mega Drive
Golden Axe II is an arcade in the genre "beat them all", very similar to the first part of the game Golden Axe. The player is given a choice of three heroes: a dwarf with a battle ax under the name of Gilius Thunderhead, a barbarian Ax Battler, who owns a two-handed sword and amazon Tyris Flare, who has an excellent long sword. Each of the heroes has his own unique magic, which he can use at any time of the game to inflict damage on the enemy.Despite the fact that all the characters and gameplay migrated from the previous game, there are still some innovations in the game. For example, "Attack back" (performed simultaneously by pressing the jump button and attack button). Now the player could throw the enemy left or right to hit the other opponents. But, more importantly, the magic system was redone. In the first part, when the gamer pressed the magic button, he spent all the jugs (a unit of magic in the Golden Axe series). In Golden Axe II, you can use as much magic as you need. To do this, you have to hold down the magic button and release it when the meter has reached the desired level.There are two modes in the game. One of them is called "Duel", in which players stage by stage fight against enemies, with each stage getting more and more difficult enemies. The other is called the ordinary regime. In it players must go through different areas, fighting with various enemies.
After each level, the game shows the player's skill score per level, and at the end shows the score for the entire game.

Normal mode immerses the player in the history of the fairy-tale medieval world, in which the main characters are to retrieve their golden ax from the hands of a villain named Dark Gould. The player must go through many different levels and eventually reach Gould's castle. Each level ends with the boss.

The duel mode consists of numerous rounds in which the player must defeat the enemy or a group of enemies. Each round passes on the same background. The player must be the winner in over 15 levels in order to complete the duel.

To select the desired level of the game, while on the characters selection screen, simultaneously press the right + B + start.
During the splash screen, simultaneously hold down the A + B + C buttons and, without releasing them, press start. Now release the buttons B and C, and keep button A pressed. Go to "Options" and press B + C at the same time. Choose a single mode or a game for two. Press up and you can select the desired level.
In order to have 255 magic attacks at your disposal, go to the options menu and put "special" against the magic item. Start the game and reach the boss's appearance. As soon as you hear the music announcing its appearance, hold down button C and, without releasing it during the fight, defeat the boss. Now release the C button and do not press any buttons on the bonus level. At the beginning of the second stage you will have enough magical spells.
To receive 8 extensions, on the title screen, go to the "Options" line, hold down the A + B + C buttons and press start. Release the button A (while holding down B + C). Set the options you need, including the "normal" game mode and exit the menu. Now you can set 8 continuations on the character selection screen.
‹
›
Home
View web version