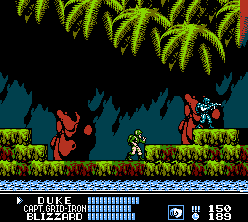 Genre: Action
Perspective: Side view
Visual: 2D scrolling
Gameplay: Platform
Published by: Capcom U.S.A.
Developed by: KID Corp.
Released: 1992
Platform: Nintendo (NES)
The game is part of the famous series "G.I. Joe", which currently has seven products for different platforms:
In all countries of the world there is a glorious long-standing tradition - toy manufacturers have been producing so-called "action figure" for many years. Usually these are toys depicting heroes of comics, movies, computer games and the like. However, few people know that the very first "action figure" was released by the famous American firm "Hasbro" in far 1964. After the deafening success of the world-famous Barbie doll, one of the designers of Hasbro, Stan Weston (Stan Weston) offered to release something similar, but only for boys. The idea was immediately embodied in plastic and metal. Against the background of the ongoing cold war and the intensification of hostilities in Vietnam, as well as the decline in interest in military service, it was decided to issue a series of military-style figures to maintain the image of the army. The series was named "G.I. Joe" and was a realistically executed soldier of various arms of the US Army. Figures for a long time enjoyed a good demand, and in 1982 the new branch "G.I. Joe: A Real American Hero" - a lot of characters ("Joe Team"), more reminiscent of comic book superheroes, rather than ordinary soldiers, separated from the series. The series became even more popular and was released until 1994, and at the peak of its popularity came two games for the NES console.
The plot of "G.I. Joe: A Real American Hero" is uncomplicated. The members of the terrorist organization Cobra have settled around the world in fortified bases and very much interfere with the lives of civilians. It is obvious that the government is calling for help from "Joe Team".
Prior to each mission, we can select three team members from the six available. In the future, already directly in the level, you can switch between them in real time:
Each hero has an individual set of characteristics: endurance - the amount of "life"; Jumping - determines how high a character can jump; Melee - the power of strikes in close combat by hand or cold steel; Weapons - damage caused by firearms. Also, each character has a certain level of firepower, which determines how the weapon will fire. The higher it is, the more powerful the weapon becomes. You can raise the level by collecting icons in the form of a pistol. The spent energy and cartridges can also be restored by selecting the icon, respectively, in the form of a "tin can" and a bullet. You can also raise the maximum amount of "life" of the hero, collecting some "chevrons". It should be taken into account that, by studying the level in detail and penetrating into hidden places, it will be possible to find almost twice as many upgrades.
In addition to weapons and ammunition at the levels are also vehicles that are designed to facilitate the fulfillment of the combat mission: a light combat helicopter equipped with a machine gun; Stepping combat machine - can jump very high; Hellish machine in the form of a wheel with spikes - easily travels across all surfaces, including walls and ceiling. However, cars can not go anywhere, and they are more easily destroyed by the enemy. And the enemies here are very diverse and well armed - they shoot, throw grenades and all sorts of flying devices. In addition, turrets and other extremely dangerous defensive structures are scattered throughout the level.
As a rule, the task for the level is to reach the enemy base, overcoming the fierce resistance of the opposing members of the terrorist organization, laying explosives in certain places and dealing with another "field commander". And for all this we are given an extremely limited period of time. Bosses are not very complicated, especially if the hero is armed with a powerful weapon. Although, of course, some will have to suffer, especially with the last and most important villain - the head of "Cobra".
The game will offer us six levels:
All levels are very diverse in graphic execution, which is quite natural, since "Joe Team" operates all over the world. Everything is drawn very well, with a smooth animation. Before the beginning of the mission and at the end of it usually shows an animated movie. Dynamic action is accompanied by excellent music - of course, sometimes it's a little bit pretentious, but basically - just beautiful, especially when you're driving a "vehicle." In this shooter should definitely play, because it is not too short and will give a lot of pleasure from the passage. At the same time, you will not get bored, since there are many levels, but they are quite short and varied.