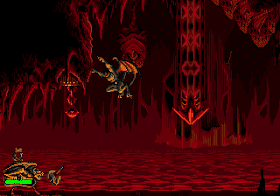 Genre: Action
Perspective: Side view
Visual: 2D scrolling
Gameplay: Platform
Setting: Fantasy
Published by: Buena Vista Interactive
Developed by: Walt Disney Computer Software
Released: 1995
Platform: SEGA Genesis / Mega Drive
As you probably already guessed, the main character of the game is the gargoyle. Gargoyle is an animated statue with huge wings and tenacious paws. They also have to manage us. On the plot of the game you (the protagonist - the gargoyle) need to get a certain "Eye of Odin" - a powerful artifact that empowers its owner with destructive force. The game gargoyle will visit different epochs and of course, many different places: from the fortress to the megalopolis. You will even have the opportunity to visit the ADU! In one of the stages the gargoyle will visit the "subway" and even with a breeze ride on the train.
The logo "Gargoyle" makes a great impression, on the background of which the fire is burning. And in general the game itself can attract the gazes of many gamers.
Gargoyle is a very mobile creature, it can both fly and walk, and even climb the walls (in many stages it will come in handy quite often). Also, the gargoyle has huge sharp claws, which also deals with its enemies. And this creature has many enemies. Here and archers, and Vikings, and knights. The further you pass the game, the more perfect and powerful opponents confront you. At the beginning of the game a variety of warriors, and in the city gargoyle are confronted by high-tech robotic killers.

The ability to climb walls gives a kind of sense of freedom. But this freedom on some walls is limited by a variety of spikes. The gargoyle has another interesting ability: in the walls and the floor with cracks you can punch a hole. In general, behind them are hidden a variety of bonuses. Replenishes the hero of his life with artifacts, gold cups and bowls. If you pick up a round shield, then he will make you indifferent to injuries for a while. You have to spend an "animated statue" through eighteen difficult stages. The main feature of the game is that the gargoyle will act throughout the game in different eras. In every epoch there are warriors. Management in the game is not very difficult. You quickly get used to it and act almost automatically.

The game uses excellent animated graphics. Although for the robots used digitized 3D models. In each stage there are wonderful landscapes, characteristic for this or that era. Since the gargoyle acts under the cover of night, most of the stages seem gloomy. But this darkness conveys the whole atmosphere of mystery. Darkness is one thing, the twilight in some stages (for example, in the ADA) prevents the stage from passing.

Music in every era of its own. It even more immerses us in the atmosphere of the events. Most tracks, like the game itself, are gloomy, there are many low tones. Pleases that it is not the same. But such music quickly gets boring. And with sound design here everything is all right: excellent explosions, cries of dying people, the effects of the surrounding situation. In general, music and sound are above average.
So, what can you say about the game in general: a well-made "sewn" igruha, one can say is made to the conscience. But if the developers worked a little on the music, then the game would be more pleasant and interesting to play. In short, those who like mysterious stories and ancient heroes, the better to play this game. Well, the rest on your own.