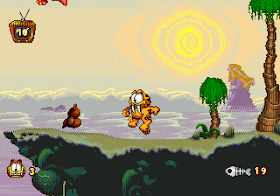 Genre: Action
Perspective: Side view
Gameplay: Platform
Published by: SEGA of America
Developed by: SEGA Interactive Development Division
Released: 1995
Platform: SEGA Genesis / Mega Drive
Truly one of the most beautiful platformers for Sega Genesis / Mega Drive. There are even digitized 3D models of various objects. We play a cartoon character striped cat, Garfield which was invented and implemented by Jim Davice. The plot of the game is simple, Cats Garfield falls into the TV. It should be noted that many games embody this idea to take only Spot go to Hollywood or Gex for PSX.
Dog Odie scares Garfield when he's watching TV. From fear, Garfield jumps up and lands directly on the TV. After that it takes the form of a heap of garbage. Garfeld tries to fix it, and throws out extra details for the chair, it would be better if he did not do it. After that, his adventures begin.
There is also a small bonus game where you need to hit the hammering heads from the holes with a hammer.
In 1996, Garfield - The Lost Levels was released and distributed through the Sega Channel - network access to it, was accessible over a cable network, using a special device. In this game there were exclusive levels that were not included in the original game.