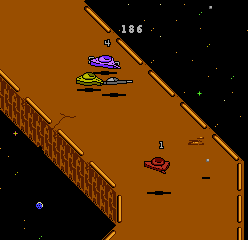 Genre: Action, Racing / Driving
Visual: Isometric
Gameplay: Shooter
Setting: Sci-Fi / Futuristic
Published by: Activision
Developed by: Activision
Released: 1991
Platform: Nintendo (NES)
"Galaxy 5000: Racing in the 51st Century" - a racing game developed and published by the company "Activision" in 1991 for the NES. Despite the very positive feedback from critics, it was no longer reprinted on any other systems and did not receive any sequels. "Galaxy 5000: Racing in the 51st Century" was one of the latest games released by the company "Activision" for the 8-bit console company "Nintendo".
The plot of the game is extremely simple: we have to take part in the extreme race for survival along the circular routes on the starships hovering above the earth. To win it is necessary to overcome 36 trails located on all 9 planets of the Solar system, beginning with Mercury and ending with Pluto.
"Galaxy 5000: Racing in the 51st Century" is a race for survival with isometric graphics, similar to the games "Micro Machines" and "Rock N 'Roll Racing." The main game can be played only alone, and for two players there are four special tracks. In races, except for the player, three ships of opponents participate. As the game progresses, earning money for winning in the race, it becomes possible to buy new starships (there are 5 of them all in the game), faster and armed with more powerful weapons. With each new arrival, the tracks become more complex, mines, spikes, machine-gun turrets and so on come out from under the ground.
In the game there is a rather unusual for such early games system of damage received by each vehicle - at the end of the route on the screen appears our spaceship with a sensor of the received damages. The repair is made for the money earned, and it becomes evident how the racing ship is gradually restored: the dents disappear, the parts lost in the skirmishes appear. On the routes are scattered different bonus items, some of them are visible at once, some must be "knocked out" of various obstacles. There are three types of bonuses: extra money, partial car repair and special weapons.
A distinctive feature of the game is the presence in it of primitive voice phrases, shouted by the driver in a collision with other ships, such as: "Hey! Excuse me!", "Watch it!".
In general, "Galaxy 5000: Racing in the 51st Century" has received quite high marks. Some critics have underestimated them due to a not very successful mode for two players: in addition to the fact that it is impossible to complete a game completely together, many did not like the lack of screen separation, because of which the ship-leader constantly pulls behind the lagging player (later this mode became De facto for many racing games). The British magazine "Computer and Video Games" staged a game in October 1991 with 86 points out of 100. According to the magazine, the game took all the best from such masterpieces as "F-Zero" and "Super Sprint", becoming one of the best in its genre On the NES. "Nintendo Power" rated "Galaxy 5000: Racing in the 51st Century" in September 1991 in 76 points out of 100, calling the game quite amusing, noting, however, the poorly designed game mode for two. Another British game magazine "Mean Machines" put the game average rating of 91%. In the review of the February 1991 issue of the game, the game is also compared with "F-Zero" on SNES (graphics and gameplay were especially appreciated).
‹
›
Home
View web version