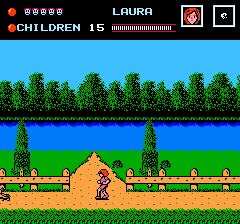 Genre: Action
Perspective: Side view
Setting: Horror
Published by: LJN Toys
Developed by: Atlus Co.
Released: 1989
Platform: Nintendo (NES)
The game is based on the famous horror film, which became even more famous due to the appearance of the computer virus of the same name. Well, the game has nothing to do with the game, although you will have to deal with it by solving logic problems.If the 13th number falls on Friday, the evil guy Jason Vorhiz, drowned in Lake Crystal by inattention to the rest camp tutors, climbs out of it into the light of God and tries to remind of his tragic fate to all who get caught up in his hurry. In all, there are 15 helpless children in the camp in the care of six teenage caregivers. You have to organize a circular defense against the bloodthirsty Jason.