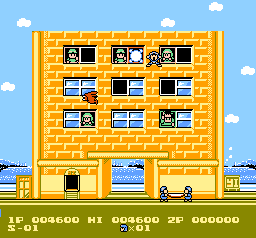 Genre: Action
Perspective: Side view
Visual: 2D scrolling, Fixed / Flip-screen
Gameplay: Arcade
Setting: Fantasy
Interface: Direct Control
Published by: Epic / Sony Inc.
Developed by: Aicom Corporation
Released: 1989
Platform: Nintendo (NES)
"Flying Hero" - quite an interesting arcade dedicated to the topic of firefighters and the rescue of civilians, caught in an emergency situation because of the fire. It was released only for the Japanese region, and its Merikan version of "Blazebusters" eventually did not see the light.
The mechanics of gameplay is very similar to another famous game of all time, "Arkanoid", only here instead of a ball - a fireman, instead of a platform at the bottom - your buddies with tarpaulin cover, and the goal of the game is to save all people from a burning building. Keep in mind that the fire in each window has a particular flare up, so people need to be rescued very quickly. In the game there are bonuses that are knocked out by the jumping fireman from the fire.
Despite the simplified graphics, "Flying Hero" deserves close attention, as its gameplay is at its height. Very unusual and interesting descendant of Arkanoid!
‹
›
Home
View web version