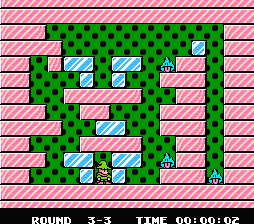 Genre: Action, Puzzle
Perspective: Side view
Gameplay: Platform
Interface: Direct Control
Published by: Tecmo
Developed by: Tecmo
Released: 1993
Platform: Nintendo (NES)
The story described in the game occurred in those days when the powerful wizard Dana was still a beginner in magic.
So, once, a long time ago, far away in the north, a small beautiful island "Coolmint Island", entirely made up of ice, sailed to the sea. For many years the Winter Fairies lived in peace and harmony. But one day the evil wizard Druidle appeared and fired all over the surface of the island, which caused a global melting of the beautiful ice world. The Winter Fairies were determined to do something to save their world, but they did not have the power to resist the flaming fire. Queen Fei found out about this incident and urgently sought the chosen one: the one who could protect the melting ice world. As a result, such a person was found and selected from a variety of willing applicants. They became Dana - a young student, who, however, did not yet have sufficient magical power. But the Queen Fei knew that this young man, unlike other contenders, is very manly and has a very sharp intellect. All that the Queen "gave" him along on the road is just a secret of special magic that can be used to extinguish a fire. So, the adventures of the main character begin!
The goal of the game is to extinguish all the lights in the level (which are very, very many here). The protagonist can do this either with the help of magic to create and melt the ice (in the style of "Lode Runner"), or by pushing the ice blocks with the foot. Ice blocks can not be created in a place that is already occupied by fire, so you often have to find a way to create a block near you or over a flame in such a way that you can then conveniently "kick" it or kick it down. If a lump is created next to another object or a wall holding it, it can not be moved anywhere and falls down. In some places to overcome the abysses, we will have to create bridges from the ice. When a character beats a free block of ice, he horizontally slides on the ground until he encounters another object. Ideal if the object that is encountered is a flame, because it immediately wanes from contact. As the game progresses, the complexity of the levels increases, so that on late cards to extinguish all fires you will have to decently decay your head.
In "Fire 'N Ice" there is also a level editor.
Unlike the first part of the game, in the "Fire 'N Ice" much more advanced gameplay and thoughtful background (by the way, in the first part of the story, as such, there was none at all). Plus, much more juicy modern graphics and cool music. I recommend the passage of the second part.
‹
›
Home
View web version