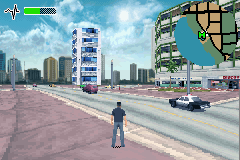 Genre: Action, Racing / Driving, Open world driving
Perspective: Behind view
Gameplay: Shooter
Published by: Atari
Developed by: Velez & Dubail
Released: 2005
Platform: Game Boy Advance (GBA)
Continuation of the series Driver. The creation of the game was entrusted to the experts in the race, but, of course, your hero, working undercover (and without him), will not only have to travel a lot, but also run, shoot, etc. Excellent graphics for our GBA. Recommended for all fans of this genre.

In the game, you are invited to go through 26 missions of varying complexity in the role of the police officer Tanner, who is investigating the case of international car theft. In the course of the game you will visit three real cities:
In addition to the missions, you can simply travel to the cities of Miami and Nice (Istanbul will open later, when all the missions in Miami and Nice are completed). During the trip you can change the time of day (morning, day, evening, night) and the weather: sunny, cloudy, rainy.
On the fourth mission, you will need to infiltrate under cover into the highly organized mafia South Beach, carrying out various tasks in the course of the game: from hijacking vehicles to contract killing of competitors. Working in a gang, you get a lot of information about who is the customer of the stolen cars, where there will be transactions for their resale and other useful information that you will later give to the police.
But in the last mission in Nice everything changes. You are issued by one of the brutal murderers who have connections in the gang - Jericho, after which you are saved by a miracle, listening to the conversation of the gang, and then flying off to Istanbul.
On the last mission, you must catch Jericho after catching the train on which he is hiding. Then, at one of the stations on the outskirts of Istanbul, Jericho jumps off the train. On the street it is already waiting for two of your partner-policemen, whom you will defend, shooting back from the numerous guards of Jericho. Then you and Jericho will have a one-on-one fight, but killing a gangster will not be easy, and your health leaves much to be desired. But you can take cover behind the garbage can. After you deal Jericho a decisive blow, you will be shown a video clip where a heavily wounded thug shoots at the main character. Both are taken to the hospital. In the video shown at the very beginning of the game, the protagonist was reanimated, but could not save. However, in the final video, you can see how Jericho dies (However, in Driver: San Francisco it turns out that he survived, like Tanner), and your condition can be stabilized.
After that, you can re-run any mission, you are available all the weapons and all three cities.
In addition to the fact that from the very beginning of the game you have access to all kinds of cars to choose from, you can ride on boats, motor boats and motorcycles. Further developments develop in Driver: San Francisco, released in 2011.
‹
›
Home
View web version