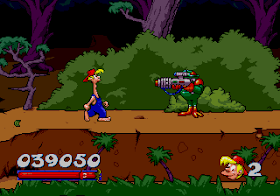 Genre: Action
Perspective: Side view
Visual: 2D scrolling
Gameplay: Platform, Puzzle elements
Published by: Core Design Inc.
Developed by: Core Design Ltd.
Released: 1994
Platform: SEGA Genesis / Mega Drive
A good game about the adventures of a dude named Bubba, armed with a stick of reusable (and diversified) use. This stick can be used in many different ways and for different purposes - for creating a springboard, for moving stones, for throwing at enemies and so on. The game is painted qualitatively, the sound is also quite good.

To view the ending, start the game from the first level and press on the pause. Type A + C + up + X + Y + B + down + B + A.
Enter any password received during the passage and start the game. Now let the hero lose lives until the Game over comes. Now go to the Password option - there you will see the entered password consisting of ten characters. Your task is to change 3,4,7,8,9 and 10 symbols to the symbol "1". Press on the start - now you have the total number of lives, which can be increased to the maximum in Options.
To reset the game, press A + B + C + start simultaneously.
Substitute yourself for an alien shot, and you will be transferred to the second level.