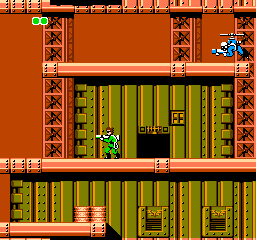 Genre: Action
Perspective: Side view
Visual: 2D scrolling
Gameplay: Arcade, Metroidvania, Platform, Shooter
Setting: Sci-Fi / Futuristic
Published by: Capcom U.S.A.
Developed by: Capcom Co.
Released: 1988
Platform: Nintendo (NES)
The plot of the game tells about the confrontation between the two states: the Federation and the Empire. Once the Federation forces found a document that referred to the started project "Albatross". But the project was not finished. About the document learned Killt - Geniralisimus forces of the Empire. He decides to finish this project. When the Federation forces learned about the Empire's plans, they sent a national hero, Super Joe, to explore the Empire's plans and prevent them from coming to fruition. But Joe is captured. Then another soldier, Nathan Spencer, and a force of Dual Powers are sent to help. As you progress, the player learns that the main part of the "Albatross" project was the resurrection of Hitler himself and the creation of weapons. When he reaches the room with Hitler, it turns out that he was late. Hitler kills Killt and tells Spencer that he will show him the "horror of the Albatross". Spencer destroys the Albatross. Then he picks up the bazooka and runs after Hitler, who is already in the helicopter. In a jump, he shoots at the pilot's window and destroys Hitler. Then he and Joe fly away from the crumbling island heroes.
Skip intro: Press A + B to skip the messages coming at the beginning of the game, and immediately appear on the map screen.

The gameplay of the game is no different from other games of this kind - the player runs through the levels and destroys the enemies. But the main variety in the gameplay makes a bionic hand. It helps the character to move through the abysses, climb onto platforms and solve some puzzles. Because of the presence of a bionic hand, the character does not know how to jump - the developers so let know that the character does not jump with a heavy claw at the edge. Another distinguishing feature of the gameplay of the game is the skirmishes with the enemies themselves. The player can run into several soldiers in the normal passage of the level, and maybe in the transition between locations: when meeting with the truck of the enemy begins a battle in the style of Gun Smoke - moving from the bottom up, the player shoots from the opponents to reach the end and fly away. Also, flying to the bases of "their", you can find interesting bonuses - armor, improved weapons and claw. They can be selected at the beginning of any level. Another feature is the communication terminals, through which you can contact the database. This is most often necessary when passing through. If the door is closed - you can open it through the nearest terminal.