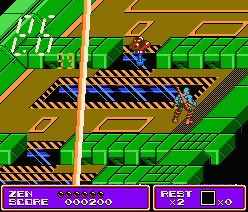 Genre: Action
Perspective: Side view
Visual: Isometric
Gameplay: Platform
Setting: Sci-Fi / Futuristic
Published by: Konami (America)
Developed by: Konami Co.
Released: 1993
Platform: Nintendo (NES)
The protagonist is the cosmic ninja Zen, who saves the Earth from pollution. The graphics of the game are more than worthy, at the highest level. The stages are quite diverse - there is a conventional side view and 3D isometry. They are also sophisticated in their tasks. It seems that the level is over, but not here it was - he unexpectedly continues, surprising with interesting events. In general, the gameplay is diverse. Xena will even have to go in the trolley. As a weapon, the hero uses the plasma whip. After the main missions, a bonus level follows, where you earn prizes (accelerated recovery, armor, life). Like many games from the company Konami, "Zen - intergalactic ninja" worked on the conscience.

Once Zen was just a clot of cosmic dust and remained on his home planet, but fortunately for him and for the intergalactic ecology, the Masters drew attention to him. On his hometown planet OM, young Zen mastered the fantastic forms of ninja combat and meditation and became a great warrior, and when he grew up a little, he gained the reputation of a real space soldier of fortune.
His combat success made him pay attention to Gardens, an average alien race with a very highly developed intelligence, especially since Zen proved himself to be a brilliant fighter capable of bringing various space criminals to his knees using his special photon-stick (Photon-Stick). Gordons were observers, who saw the situation in the whole galaxy. They hired our hero to carry out especially important tasks. As the first task that seemed to Xena rather easy, he had to recover to the third planet from the Sun in the Milky Way galaxy, which is called Earth, but he did not even know what dangers lay in wait for him in this task.
In the meantime, an extremely difficult situation arose on planet Earth. The inhabitants of Earth (Earthlings) suddenly realized that the existence of their planet is threatened by the monstrous plans of Lord Contaminous. These vile creatures appeared on earth from the burials of various wastes. The lord has a whole army of followers, who only dream of destroying the biosphere on Earth. Moreover, it turned out that one of the earthly boys named Jeremy (Jeremy) quite by chance discovered an amazing Geocrystai stone. The power of this stone can save the world from almost all dangers, and Contaminius dreams of taking this stone to realize its monstrous plans. So Zen needs to save Jeremy the Starchild, grab Geocrystai, defeat all enemies and thus save the earth. Well, you try to help him.

To successfully pass the first level, it is enough to hold down the joystick ⇨ and only occasionally to beat the pole, making its way.
Robots that try to catch up with you should be destroyed immediately, otherwise they will eventually shoot.
As soon as you see the groove with the inscription IN, get into it. By the time the press comes down, you have to stand in this recess.
For passing the level you are awarded a prize stage in which you can replenish energy, get life, protection or earn extra points.
The essence of the bonus is that on top of you falls all rubbish: banks, packages, books, and your job is to knock down all these items before they fall to the floor. After impact, each item falls into one of five cells. Subsequently, for a certain number of items you can get very useful things.
You must scramble to the skyscraper and smudge, as it should, a nasty Contaminus. This is done so ... Ninja in this game can not climb the walls, but it jumps abruptly. To climb the roof, you need, by pressing the jump, to keep the joystick pressed toward the wall. You can not be afraid of a collision with the Lord, only balls, tearing in all directions, are dangerous.
It is necessary to put out seven burning doors, from which the workers cry. To save them, it is necessary to extinguish the fire from the fire extinguishers, which are scattered on the floors and sometimes remain from the mutants interfering with your noble mission. Used fire extinguishers is very simple - Up + Punch.
In those places where, it would seem, there is no road, you can go over the pipes (Up + Jump).
‹
›
Home
View web version