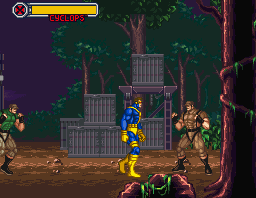 Genre: Action
Perspective: Side view
Visual: 2D scrolling
Gameplay: Beat 'em up / Brawler
Published by: Capcom U.S.A.
Developed by: Capcom Co.
Released: 1994
Platform: Super Nintendo (SNES)
Good graphics and music, and the whole implementation is quite worthy of the Marvel brand. The mutant team of Professor Xavier will again have to fight for his rights, save human lives from the encroachments of mutants who apply their forces to all kinds of insanity, abnormal ideas and the destruction of the entire human race. The game has five active characters: Cyclops, Gambit, Beast, Psylocke, Wolverine. Everyone is different in abilities, strength, character, dexterity, etc. The game has two endings, both good and bad. In order to preserve the good, it is necessary that all the mutants after the entire combat path and the missions passed were alive and well.
‹
›
Home
View web version