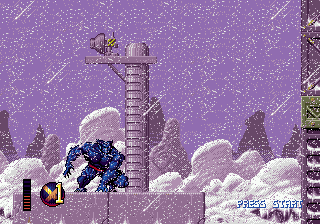 Genre: Action
Perspective: Side view
Visual: 2D scrolling
Setting: Sci-Fi / Futuristic
Published by: SEGA of America
Developed by: HeadGames
Released: 1995
Platform: SEGA Genesis / Mega Drive
From the depths of space to Earth came Phalange, which tries to absorb all the living and non-living. The game has become more rapid, dynamic. After each level there is a choice of characters, later they will play for the defeated boss Magneto. The Siberian base is passed: 1,2 - Psylock / Gambit, on the boss - Wolverine. Space base: 1,2 - Wolverine / Cyclops, 3 - Cyclops, on the semi-boss - Beast, on the boss - Psylocke. Next, take Wolverine to the stages, and Magneto will help deal with the leaders. The heroes' sprites are large, each has its own specialty. Ability, and set of techniques. Good game.