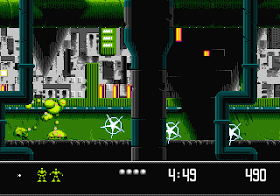 Genre: Action
Perspective: Side view
Visual: 2D scrolling
Gameplay: Arcade, Platform
Setting: Sci-Fi / Futuristic
Published by: SEGA of America
Developed by: BlueSky Software
Released: 1996
Platform: SEGA Genesis / Mega Drive
Each, even the most overpowering, video set-top boxes has games that are very proud of and which, in any convenient case, are put on display. On SEGA Genesis such "branded" games are not small, but "Vectorman" stands for many in a separate account. This thing was originally conceived as a hit, and there are no weak aspects in it. Graphics - incredible (the game uses a cunning sprite technology that allows you to make objects from a variety of pieces, for example, the Vectorman itself consists of more than two dozen independently moving balls), the music is mesmerizing (it's unfortunate that they did not release a separate soundtrack), the fascination is beyond the clouds . In general, when I found out that "Vectorman 2" appeared on the shelves, there was no limit to the enthusiasm. And the Germans (for your information, the company "Blue Byte" is based in Germany) have not deceived the hopes of all gamers, fans of the first part. The visual series became even more beautiful (although it seemed - much more ...), the rhythm of music noticeably accelerated, and the people favorite "Losharik" -Vectorem gained even more opportunities. The prehistory of the game is as follows: after disassembly with the rebellious robotics, the Vectorman flew on his rocket-garbage collector (these are the real heroes ...) on the vast expanses of cold space, when a certain villain launched an unknown homing missile of the sender-client system and, what is most important - got! The poor garbage truck began to smoke, took it and crumbled to pieces, throwing its pilot into the upper atmosphere of the first planet that came across.