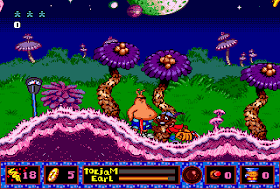 Genre: Action
Perspective: Side view
Visual: 2D scrolling
Gameplay: Platform
Published by: SEGA of America
Developed by: ToeJam & Earl Productions
Released: 1993
Platform: SEGA Genesis / Mega Drive
Is the sequel to the game ToeJam & Earl, published in 1991. The game describes the adventures of two alien heroes, TouJem and Earl, who in the first part were forced to make an emergency landing on Earth, but then safely escaped from there. On his return to his home planet, Fancatron found that some evil perpetrators had penetrated the spacecraft, who now, as revenge, are going to lead this planet to destruction. The player's duties include hunting for earthlings, sealing them in jars and deporting them back to Earth.
The platform format of the game is very different from the original ToeJam & Earl, where you had to search for treasures at randomly generated levels. The game received mostly positive reviews, critics praised graphics, soundtrack, smooth animation and the ability to play together. Commercial success was also achieved, but many fans were upset and disappointed by the significant change in the gameplay.

In the previous part, ToeJam and Earl were wrecked on planet Earth, after which they had to find a way to get away from it. As a result, they managed to do it, but some hostile earthmen, with whom the heroes are now fighting, have imperceptibly sneaked into the spaceship transporting them back to Fankotoron. In addition, the side storyline suggests saving Lamont Fankopotamus from Funk's dimension, in which he hid, frightened by the devastating activities of earthlings. Tou Jem is a red three-legged alien with a large gold medallion around his neck and a baseball cap, while Earl is a fat orange stranger in wide shorts and black sunglasses. Both are dressed in accordance with the urban fashion of the 1990s.
ToeJam & Earl in Panic on Funkotron is a linear platformer based on hunting for evil earthlings, among them "builders with psychopneumatic drills, tourists with cameras, our old familiar boogeymen, pea shooters and pretty well-fed young ladies with yapping poodles." The process of hunting includes two stages: first you need to search for earthlings among bushes and trees, then they should be brought to the cage and put under guard. The level is considered fulfilled if all earthlings are caught and returned to Earth via a spacecraft. During the passage, ten secret objects belonging to Lamont Fancopotamus, "the source of all the funk in the universe," can be found. The player can use points obtained by capturing earthlings, buying a variety of reinforcement items on them, such as "Funk Scan" or "Funk Move". It is also possible to activate the "special view", which allows you to easily find hidden bonuses on the levels. The item "Funk Move" teleports the heroes to another place, thereby avoiding enemies and impassable obstacles. Throughout the game, there are always more mini-games.

The game is a sequel to ToeJam & Earl, which in turn became a continuer of the traditions of Rogue. After the success of the first part of the studio Johnson Voorsanger Productions immediately in 1992 began work on the continuation. To create the basic mechanics and key elements, developers spent from three to four months, during this time, most of the game zones and territories were invented, and the randomly generated levels that took place in the original were removed. The original plot suggested that Tou Jum and Earl went to Earth to organize a rap concert and find the CDs lost during the first trip - this development allowed the traditional principle of treasure hunting to be preserved. According to the agreement between Johnson and Voursenger, a large number of secret items were to be added to the game, and the rejection of randomly generated levels should have made it possible to hide these items as best as possible. The development involved more workers than the creation of the first part, and the release was planned for Christmas 1992 under the name of ToeJam & Earl 2. Sega, however, reacted to the new project with skepticism and forced the authors to radically change the overall gameplay . Increased in comparison with the first part of the volume of the cartridge allowed to apply the best graphics. The soundtrack was composed of mixed old melodies, the sound quality of which was significantly increased.

In the game, objects are hidden in gifts. They can be obtained in various ways - for example, such as digging in bushes, shaking trees, pushing buttons, using coins in automatic machines etc.

You can play as one or two. Both characters, in addition to appearance and names, are no different.
ToeJam - Red, thin alien. With a cap on his head, dressed in the style of a rapper.
Earl - Orange, fat alien. In sunglasses, shorts and sneakers.
The main weapon used by the characters is the banks in which they seal the earthlings to be loaded onto the ship and sent back to Earth. In addition, there are some special abilities - special attacks and teleportation a few steps forward.

In the game are the main enemies, which need to be sealed in the jar. Super-Bank seals with one hit.
Girl - runs around the level, when meeting a character kicks. The weakest enemy in the game.
Baseball player is a black guy. Also a weak enemy, but has the ability to attack at a distance (throws tomatoes) and evade the cans.
Photographer is a man or woman tourists. One of the most dangerous enemies. Photograph the character, reducing his energy by 25%. When you press the "down" button next to the photographer, the character closes his eyes, thereby ignoring the damage.
Road repairman is a dangerous enemy, moves on a jackhammer, paralyzing a character close to him, if he is on the ground, and taking away energy. The best way to defeat such an opponent is to jump through it, throwing the cans down.
Housewife - does not attack, but if you attack it, suddenly from the bushes (trees, wells, etc.) suddenly jump out poodles. So you need to be watchful.
Poodle is a dangerous enemy. Fast, can jump, bite reduces health by 20-30%, but has a very small reserve of one's health. Usually there are flocks from two to three to five and six.
Mad fairy - can fly, drops on the character a funny powder, which stops him for a while, but does no harm.
Flying boy is tied to several balloons, due to which he flies. Attacks at a distance, bullets in the character peas.
Striker is a naked man in a cardboard box, mumbling something, strong. It is able to hide in a box that serves as a protection against cans. On the run, he tries to ram the character with the box body. Also attacks from a distance. One of the most dangerous enemies.
Boogeyman is a dangerous enemy, attacks near, trying to sneak up from behind and frighten. Has the ability to become invisible.
Ghost of the cow - flies, is able to move into the character, taking away a fair amount of energy. Just like the boogeyman, he can become invisible.
Duck-pilot - a monotonous creature on a flying carpet, one of the most dangerous enemies. Quickly flies over the character, diving at him and causing great damage. To evade his attack, you need to press the "down" button.