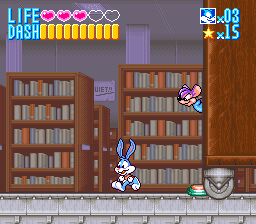 Genre: Action
Perspective: 3rd-person, Side view
Gameplay: Platform
Published by: Konami of America
Developed by: Konami Co.
Released: 1992
Platform: Super Nintendo (SNES)
The player controls an anthropomorphic blue rabbit named Buster Bunny, who is tired of sitting at home and he craves adventure. Here, as in the game Tiny Toon Adventures: Buster's Hidden Treasure, the player controls only the rabbit. Friends come only when the player will be offered a wheel of luck and a choice of one of five games, the acting characters are characters from the animated series.
The game has 6 levels, each of which takes place in different places: academy, western, castle and others. Bosses in this game three, but the final boss for the first time is not Montana Max, but Duck Vader (who turned out to be a disguised Plucky). As other bosses are represented Dizzy Devil, who organized a pogrom in the kitchen, as well as a certain monster, which under the influence of an evil professor attacked Buster. In the game there are many different enemies that interfere with the passage of Buster, but after the destruction of each of the enemies appear gold stars. A hundred of these stars will give Buster an extra life.

A - in this game the button is not used, but the control can be configured in the menu;
B - a big jump, with which you can not destroy enemies, but you can jump over them;
X or Y - a small leap with a coup, the main means to destroy enemies;
L or R - short-term Buster acceleration;
Down arrow - duck; After acceleration ride on his stomach, sweeping away enemies.

The main bonuses in the game are of two kinds: Gogo Dodo and carrots. Bonuses with Dodo are responsible for energy, and bonuses with carrots - for the ability to endure strikes without loss of life.
An additional blow. The bonus itself looks like a silver carrot, and on the screen it looks like a heart. Adds one more opportunity to endure damage without losing a life. It is added only to an unoccupied slot. An analogue of the bonus from previous games.
Maximum of impacts. It looks like a golden carrot. Fully restores hearts to empty slots.
Additional slot. It looks like a crystal carrot. Adds an extra slot for the heart. More than five slots can not be.
Maximum energy. It looks like a silver Dodo. Restores the energy to the maximum.
Invulnerability. It looks like a golden dodo. For a while Buster is invulnerable. At the same time Buster flashes, and all the enemies he touches are destroyed.
Destruction. It has the form of a crystal Dodo. When you take this bonus, all enemies on the screen are destroyed.
A life. Looks like a rabbit. Adds one life to Buster.

In a break between the levels, Buster and Babs are offered to play roulette. The rules are very simple: what kind of hero falls on the roulette, that game and should be played. Roulette sectors:
Switi Pye. It is suggested to weigh the toon, which has a player and a computer. You should choose one of the toonsters and compare with the one chosen by the computer. If the player's hero outweighed the computer's hero, an additional "life" is charged. For a draw and a loss, "life" is not granted. If after five attempts the player has more wins than the computer, one more "life" is charged. If all attempts are to be tied, five "lives" are charged at once.
Hampton Pig. It is proposed to pave the way for Hamton to collect all the apples located on the puzzle. For each collected apple, one "life" is charged. The game ends as soon as Hampton collects all apples or falls, or the time allotted to the game ends.
Plucky Duck. It is suggested to play bingo with Plucky Duck. A 5 × 5 playing field is provided, on which there are ten heroes (one can meet from one to five times), and a free field in the middle that replaces the missing cage. Plaky draws a ball with a picture, and all the fields on which the character shown in the picture is located are crossed out. The goal of the mini-game is to collect five characters vertically, horizontally or diagonally. For each line collected in this way, one "life" is added. The higher the complexity, the less attempts: at the child level - eight attempts, on the normal - seven, on the test - six.
Furball. It is proposed to play tennis with a cat Furbollem. For fifteen hits on the opposite wall without a miss, one "life" is charged. During the game of tennis, it is possible to get to one of the three heroes that appear opposite. They will give additional opportunities: Calamity Coyote (the slowest) stops the timer for a while, Condor Concord slows down the tennis ball, and the kid Beeper (the fastest) automatically adds one "life".
Babs Bunny. It is suggested to run around the room and save friends. It's like a Pac-Man video game. Opponents: Elmira Duff (slowly walks in circles, but increases speed when Babs is in sight); Dizzy Devil (very quickly moving, spinning a top), and the pit bull Arnold (slowly walks in circles and represents the least threat). For each saved hero, one "life" is added. The game goes on the time, which decreases with increasing complexity: at the child level is given sixty seconds, on the normal - thirty seconds, on the test - fifteen seconds. The game ends as soon as Babs releases all captives or is caught, or the time allocated for the game ends.
‹
›
Home
View web version