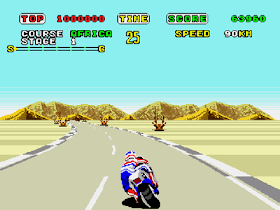 Genre: Racing / Driving
Perspective: Behind view
Gameplay: Arcade
Vehicular: Motorcycle
Published by: SEGA of America
Developed by: SEGA-AM2 Co.
Released: 1990
Platform: SEGA Genesis / Mega
The game was released for Sega Genesis / Mega Drive, Amiga, Atari ST, Macintosh, ZX Spectrum, Amstrad CPC and Commodore 64 in 1989. Super Hang-On was also released for the Sharp X68000 computer only in Japan. The game was present on several compilations for Mega Drive, in particular, Mega Games I (delivered together with a prefix called Mega Drive Magnum Set) and Sega Genesis Six Pack. A version for arcade machines was released for the Wii Virtual Console in Japan on September 14, 2010 and May 3, 2012 in other regions. A version with a stereo image was released for the Nintendo 3DS eShop in Japan on March 27, 2013.

Arcade mode in Super Hang-On is similar to that available in the original Hang-On, but unlike it, you can choose one of four tracks, located on different continents. Each of these routes has its own set of stages. If the player accelerates to the normal maximum speed of 280 km / h, a turbo button is activated, the use of which allows a maximum speed of 324 km / h. Each stage is about half shorter than the original Hang-On. The African route is the easiest and shortest of the four (6 stages). Asian is more difficult and in length is similar to the route from the original Hang-On (10 stages). The American track is the penultimate in complexity and consists of 14 stages. The most difficult route is European, it consists of 18 stages. At the beginning of the race, the player can choose one of the four music tracks that will play during the race. This feature was borrowed from Out Run.
The version for ZX Spectrum is the exact repetition of the arcade (as far as possible on this platform) and was included under the number 27 in the list of Your Sinclair Official Top 100 Games of All Time.

The original mode is present only in versions for home computers and is more full of features than the arcade mode. The player must defeat seven different opponents in races with increasing complexity and length of trails. If a player wins a race of nine races, he moves to the next opponent, if he loses, he returns to the previous one.
The gameplay is similar to the arcade game, but there are the following differences: there are no time limits, getting too much damage or full wear of the parts leads to the player leaving the race. In addition, the player passes the track is not one, but with the enemy. The turbo mode is not available until the turbo engine is purchased.
The motorcycle can be improved by purchasing new parts: the frame (affects the maneuverability), the engine (acceleration, the presence or absence of the turbo), the brake (torque), the muffler (acceleration), the oil (acceleration) and the tires (enhances the clutch)

The arcade version was released for the Wii Virtual Console in Japan on September 14, 2010. In North America and Europe, the game was released on May 3, 2012. The game was modified to avoid copyright infringement: billboards with the names of these companies were replaced by similar billboards with mention of other Sega games such as Out Run and After Burner.
Another version was released for Nintendo 3DS via Nintendo eShop in Japan on March 27, 2013. This version of the game supports stereo image and tilt control of the console.