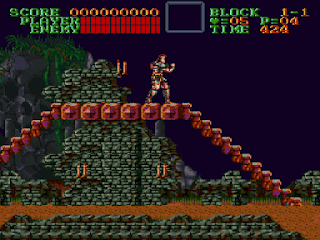 Genre: Action
Perspective: Side view
Visual: 2D scrolling
Gameplay: Platform
Setting: Fantasy
Narrative: Horror
Published by: Konami
Developed by: Konami Co.
Released: 1991
Platform: Super Nintendo (SNES)
Without a doubt, Super Castlevania IV has become one of the best games of the legendary series now, having managed to raise it to a whole new level. Let's try to figure out why this incarnation of Castlevania is still considered the benchmark platformer.
So, in the distant 1991 Konami releases the first 16-bit Castlevania for the new, gaining momentum of the Super Nintendo console. I must say that the fans of the series were looking forward to the moment when their favorite game will appear on consoles of a new generation, and their expectation was rewarded a hundredfold. But first things first.
In the plot plan, Super Castlevania IV is a remake of the very first part of the series, released on the NES. We again take command of the gallant young man Simon Belmont and go to the castle of Dracula, in order to whip up his ass restless host-bloodsucker. This concludes the similarity and starts demonstrating the possibilities of SNES to its fullest.
Of course, the first thing that catches your eye when you get acquainted with the game is its graphics. Never before has the world of Castlevania looked so alive and realistic. Artists and designers have done an excellent job, and from the very first minutes the game literally bewitches with its atmosphere, melancholic, a little frightening, but at the same time unspeakably beautiful. Almost the entire palette of the game is sustained in gloomy, depressive tones. All the scenery, be it the abandoned stables, the cemetery in the forest, the dungeon, etc. beautifully detailed and have an individual character. There were many great effects: clouds floating in the sky, fog, transparent surfaces. Especially I want to note the use of the famous Mode 7: a rotating room and a boss-golem, growing in size whenever you attack him. The character sprites are pretty large and well-detailed, but in my opinion, they could be animated. But these are trifles ...
The second aspect of the game, which evokes unparallelized admiration is music. She's just brilliant! The sound chip SNES opened up a wide scope for composers to realize their ideas, and the result can not remain indifferent. Most of the music in the game was clearly written under the influence of composers of the Baroque and Romantic era. For example, a perfect example of Romanticism can be the composition at level 3-1, in which gentle overflows of the harp and sad melody of the flute perfectly correspond to the scenery of the cave, where everything seems to be half asleep. Of course, there were remixes of old, favorite melodies, and such pearls as Bloody Tears, Vampire Killer, Beginning acquired a new and fresh sound, perfectly suited to the spirit of the game. I think, to mention that sound effects are also superb.
The gameplay as a whole remained unchanged compared to the previous parts of the series. You need to go through ten long enough levels, destroying various undead along the way and avoiding traps. At the end of each level, the boss waits. As usual, candles can be shaken out of hearts and special weapons, which also remained unchanged since the first Castlevania. But, of course, there are interesting innovations that will not let you get bored. For example, on one of the levels you will need to jump on the huge swinging chandeliers, in the other, get away from the huge gear wheel, etc.
About control, you can say only one thing: it's gorgeous! Simon perfectly obeys the joystick and can whip at once in eight (!!!) directions. Another interesting innovation is that now you can cling to the whip for special rings, to get across other parts of the path which are insurmountable.
The complexity of the game depends on how much you are skilled in games of this kind. Some stages do not pose a big problem, and in some, for example in a dungeon, you can pretty much suffer. And by tradition, the last bosses are very tough. The same Death, although not as strong as in the first Castlevania on NES, nerves it is able to spoil. And, of course, Dracula hardly anyone will overcome the first time. Nevertheless, the game is completely passable, there is a system of passwords and endless continuations. So, having gained patience, you will overcome it.
‹
›
Home
View web version