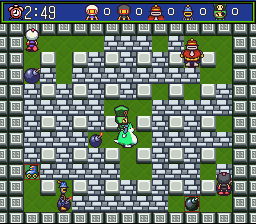 In this mode, the player can choose which level he wants to complete. The main map is zoned, where each zone corresponds to a map of an earlier game in the series (zone 1 corresponds to the map of Super Bomberman 1, zone 2, Super Bomberman 2, and so on), using its maps. stages, and monsters (Note: Heads of previous games have not been added to the game.) Instead, at the end of each zone, there is a boss different from previous bosses. other monsters or changing the layout). Depending on which path the player chooses, it may accrue 100% completion. There are two endings available, depending on where the player faces the last boss. After finishing the game with 100%, the game restarts the map and allows the player to finish with the maps in 200% thus obtaining a new password.

Battle mode is the multiplayer mode of the game. There are three sub-modes to play. The first one is the most basic mode where the player chooses only his character, how many players he will be and some other basic options, such as time per battle and amount of trophies to acquire. The other two modes are more advanced and allow the player to edit which items will be present on the map (mode 2) or which items each of the characters will have at the beginning of the game (mode 3).
In battle mode 9 different characters are released to the player to be chosen, all of them (except the first one, which is white bomber itself) are enemies in normal game mode. In addition, there are 13 different phases to be used, where each has its own gameplay.

Rooeys are creatures similar to kangaroos. Also present in Super Bomberman 3, rooeys are found by the player when destroying a common block, inside an egg with green spots, and are acquired when he touches the egg. Each of the rooys has unique appearance, color and abilities.
‹
›
Home
View web version