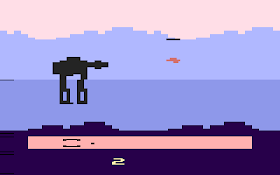 Genre: Action
Perspective: Side view
Visual: 2D scrolling
Gameplay: Arcade, Shooter
Setting: Sci-Fi / Futuristic
Published by: Parker Brothers
Developed by: Parker Brothers
Released: 1982
Platform: Atari 2600
The player takes the role of Luke Skywalker and controls an armed, flying snowspeeder of the rebellion, also to fight armed, four-legged campers - the so-called AT-ATs (All Terrain Armored Transporter) - the Galactic Empire on the Hispanic Hoth. The goal of the game is to keep these AT-ATs as long as possible before they succeed in destroying the energy generator of the shield of the echo base, the rebel base. The difficulty level is different and depends on various variables such as the speed of the Imperial runners, their armor and their additional target-seeking ammo, the "Smart Bombs".
The player can destroy these AT-ATs by shooting with the laser guns of his glider on the head and torso of the Campaigners. Shooting on their legs is ineffective. When the AT-ATs are damaged, they change their color from black (undamaged) over several shades such as gray-green, purple, red, orange and eventually to yellow (badly damaged) as a damage model, after which it explodes. It is also possible to destroy the runners faster, with only one shot, by shooting one of three randomly generated flashing points on the runners of the runners, the weak points in the armor, or open weapon shafts. The player earns points for hits and demolitions. In addition to the point, a radar screen is displayed at the bottom of the screen, indicating the distance between the camp and the distance. When you reach a map edge, you get out of the opposite side again. One can also regulate the speed of its glider.
The campers also shoot at the glider, which is commanded, with laser guns. When hit, the color changes from black (undamaged) to several shades of gray, purple, red, orange, and finally to yellow (badly damaged) until it explodes. After three hits, the glider is destroyed, the player has a total of five gliders, five lives. It is possible to fire the fired shots of the AT-ATs with their own laser beams in order to neutralize them. You can also land a damaged snow slider in the countryside to repair it automatically.
In difficult levels, the runners are heavily armored, causing the skidler to collide with the runners, which can then damage him as opposed to previous levels. In other levels, some AT-ATs sometimes have smart bombs, which are shot down by them and track the glider for a while. When this is hit, it explodes immediately instead of just taking damage.
Every now and then the player gains "The Force" as a bonus. When this happens, the glider lights up in color and is invulnerable for a short time. In addition, Star Wars music can be heard.
The game ends when five snowgliders - ie, lives - are destroyed, or when one of the AT-ATs reaches and destroys the echo base. In this sense, the game can not be won (like many other Atari 2600 games), you can only win time and points by holding and fighting them. The trick of critically damaging the first and last Campaigner (Yellow Damage Model) helped him and the AT-ATs, which were some distance apart, slow down, giving the player more time to attack the runners (more targeted). When a Campaigner reaches the far right card edge, the game is over as it destroys the rebel base.
‹
›
Home
View web version