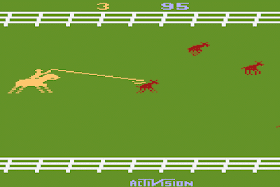 Genre: Action
Perspective: Bird's-eye view
Visual: 2D scrolling
Gameplay: Arcade
Sport: Horse / Derby
Published by: Activision
Developed by: Activision
Released: 1981
Platform: Atari 2600
The game is slid horizontally to the right with a third person view. The player can move the cowboy vertically along the left side of the screen. The cattle also run to the right, on six possible horizontal lines, but more slowly than the cowboy, so they meet. The goal of the game is to catch the cows lazo, or to push them forward by going to the horse. If 3 cattle are let go, or exit from the left side of the screen, the game ends.
There are four types of cattle with increasing value, including the Black Angus, which is the most valuable one, but can not be moved and necessarily taken to the lazo. During the game, if you collide with an ox skull or with Angus, you will miss precious moments because the horse fits. If, on the other hand, the horse touches one of the other types of cattle, the latter will be pushed forward together with others in case they are in the group. Angus is still standing, so he leaves faster than the playing area.
The player gets an extra life every 1,000 points. This makes it possible for a skilled player to beat the game, as around 5,000 points the game resumes from head to side with the same pattern.
‹
›
Home
View web version