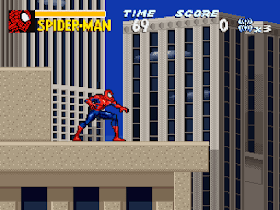 Genre: Action
Perspective: Side view
Art: Anime / Manga
Gameplay: Fighting, Platform
Setting: Sci-Fi / Futuristic
Published by: Epoch Co.
Developed by: Argent, Epoch Co.
Released: 1995
Platform: Super Nintendo (SNES)
A good realization of the adventures of Spider-Man. In the game, he climbs the walls, hovers on his web, applies his fists and legs. On numerous enemies, you should not linger too much, since the time for finding bosses is constantly limited. Maybe this is done so that they do not do more misfortunes or much better to get used to the heroic everyday life. But, one way or another, they started the game, and straight to the end of the location on their webs, skip buildings, climb the walls and run to meet another villainous villain. All this for the sake of justice, the tranquility of New York and its inhabitants. Music and graphics do not shine with any kind of delights, but they do not scare off the game.
‹
›
Home
View web version