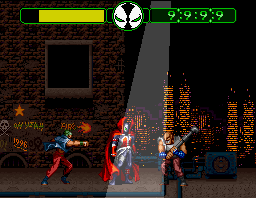 Genre: Action
Perspective: Side view
Visual: 2D scrolling
Gameplay: Platform
Setting: Fantasy
Published by: Acclaim Entertainment, Sony Electronic Publishing Ltd.
Developed by: Ukiyotei Company
Released: 1995
Platform: Super Nintendo (SNES)
Another superhero action on Super Nintendo. I think in Russia, this hero should already know, because it came out a good enough film and an animated series. Spawn resists penetration to the surface of every demonic offspring, incidentally destroys all street slum and criminal syndicates. He does not mind to go down to hell and ask a bashing of evil there. What distinguishes this action from other numerous superhero games on Snes is that it can be called one of the best fighters. The set of skills can be envied by any high-quality Beat-Em-Up. In the game there are also simple punches with the hand or foot, jumps in the jump; When the Spawn soars on his cloak, you can also use battle heels, etc. There are also more powerful features: slipping, striking from a sitting position, combinations in running; Also Spawn is able to turn around sharply, in order to beat the enemies of suitable at the same time in front and behind, thereby not allowing himself to be taken by surprise. And the main feature of the game - just a powerful combination with the use of the psychic force Spawn'a. This is throwing into the enemies of all balls, homing stars; On bosses you can use psi-impact, which significantly reduces their life energy; Also there is a fiery blow, and blowing up all enemies in the field of sight a deadly energy release. Also, Spawn's skills include teleportation and regeneration. It is not necessary to take a special interest in psychic energy, since the continuums in the game depend on it, and hence the possibility to start the game from the level at which they lost. You need to be able to stretch these psi-opportunities for the entire Spawn's combat path. As you see the skills of the hero is very much. Some blows are better to look at some FAQ or ask the forum for knowledgeable people, as they are very necessary for a successful passage. Add to the rich possibilities in the game, smart graphics and sound and get just a great game. Maybe it's not even one of the best superhero fighters on Snes, but the best.