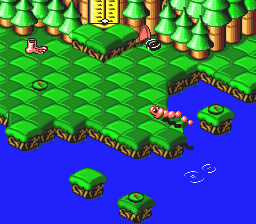 Genre: Action
Perspective: Bird's-eye view
Visual: 2D scrolling, Isometric
Gameplay: Arcade
Published by: SEGA Enterprises Ltd.
Developed by: Rare
Released: 1993
Platforms: SEGA Genesis / Mega Drive, Nintendo (NES)
Despite its innovativeness, the game was sold relatively poorly and was unattractive for the players. The reason for this probably was the high complexity of the game and the difficulty in managing, as well as unsuccessful marketing.

The main characters of the game are two snakes Rattle (red) and Roll (blue). The goal of the game is to eat as much as possible the number of round creatures of red, blue and vague color known as Nibbley Pibbleys, gain weight necessary to activate the weight lock and go to the next level (on some levels there is no lock, but the door Open only when the player eats the necessary amount of Nibble Pibble). As Nibble Pibleby consumes snakes increase in length (a similar mechanism appeared in the late 1970s in games familiar to the Russian audience as Snake), the gain can occur faster or slower depending on the color of the eaten creature matching the color of the snake. Opponents of snakes can be killed with the help of their language (can be lengthened due to collected bonuses), or jumping on top of it (does not apply to bosses and some types of monsters). When attacking a monster, the snake becomes shorter, losing one segment, if all segments are lost, the snake loses one life. Also, life is lost if the snake falls from a great height, falls outside the playing level and if the time allocated for passing the level ends. If players end all lives, the game ends, and they can use several continue to start the game from the same place. Simultaneous play of the two is supported. In total, there are 10 levels in the game, populated by a large number of Nibble Pibbles, monsters like Big Foot (which are also intermediate bosses), traps, moving platforms in the form of carpet-planes and others, plus an additional eleventh level - battle with the final boss. In the first level there is a chance to have time to get on the rocket, which will immediately move you to the 8th level. On pirate cartridges this was the only way to get through the game, since the 7th level was bug and there were no fountains working, which should have been thrown onto the top platform. The sound of a flying rocket is heard a few seconds after the start of the game.

Snake Rattle 'n' Roll earned a reputation among players for a game with extremely high complexity, and that was the reason. The levels of the game are filled with all sorts of traps, such as bombs disguised as Nibble Pibbles, jumps from the ground blades falling from above the anvil and others. In addition to the traps, the game world itself, in which the slightest careless action on the part of the player can result in a loss of life, is also a sufficient danger: the topology of the levels is often such that the player has to manage the snake very carefully, count the time for a successful jump, measure its length and angle with the place The proposed landing.
‹
›
Home
View web version