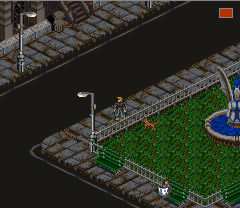 Genre: Action, Role-Playing (RPG)
Visual: Isometric
Setting: Cyberpunk / Dark Sci-Fi, Fantasy, Sci-Fi / Futuristic
Narrative: Detective / Mystery
Published by: Data East USA
Developed by: Beam Software Pty.
Released: 1993
Platforms: Super Nintendo (SNES), SEGA Genesis / Mega Drive
The player takes control of Jake Armitage, a courier who is being shot dead and almost killed on Seattle's streets in 2050. He wakes up on a backyard with serious memory loss, and does not remember why he was shot.
As an action RPG, Shadowrun combines both table role play statistics along with the real time of the gaming world. For example, the player controls Jake by moving him around with his controller and when he is attacked, he must use weapons or magic commands to answer the fire. Certain battles in the game require sharp reflexes. The game gets even more complicated when the city of Seattle is playing a very hard state. At almost every game image, there is at least one hidden assassin who starts shooting at Jake from their hiding places. The player must then immediately find the source of the attack and kill the enemy.
During the game Jake builds up his "karma" by killing enemies - the easier enemies give a little karma, the harder the enemies a lot. This karma can then be used by the player to give Jake some skills and magic powers. Physical attributes include simple factors like how much health Jake has. He also has the opportunity to learn new skills, such as negotiating the price, which gives lower prices in business and leadership that makes it easier for him to keep his assistants.
It is possible to hire a helper (sk runners). But when the game is for a player, auxiliary Jake closely follows the heels and shoots as soon as they see the enemy. The maximum number that can be hired depends on Jake's karisma level, and if he has the leadership capacity, he can keep his help longer. If the helper dies, they are recreated on the spot where Jake first hired them. Depending on the assistant's strength and skill, the player can give him weapons and armor.
When Jake talks with characters and hears a new and unusual word, this is underlined and then added to a database so that he can use them later. When he then talks with other non-playable characters, he can ask them about the new word he learned, thus moving the story of the game forward.
The game also includes an unusual way to enter cyberspace. A certain point in the game, Jake, by using a so-called cyber deck, can hack into computers to get information and earn money. During these sequences, the game becomes 2D where an icon of Jake moves in the cyber world, fighting defense programs and retrieving data. Just like in reality's Shadowrun and in common cyberpixel literature: if you die in cyberspace, you die in real life too.
‹
›
Home
View web version