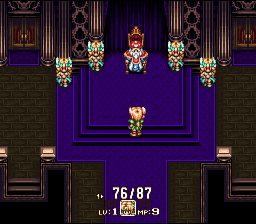 Genre: Action, Role-Playing (RPG)
Perspective: Bird's-eye view
Art: Anime / Manga
Setting: Fantasy
Published by: Square Co.
Developed by: Square Co.
Released: 1995
Platform: Super Nintendo (SNES)
The third part of the series Mana. According to the schedule and music, it can safely be called one of the best games on SNES. Before the game starts, choose a hero and 2 friends. All the characters have different destinies, but in the end everything comes to a common denominator - you must prevent a world catastrophe by protecting the 8 Mana Stones. Heroes gain experience in battles (reaching a certain level, you can change the class of the hero, which will increase his strength), use a variety of weapons, magic and friendly characters. There is a possibility of playing together. Remember the conservation - the statues of the Goddess or in the INN.

The plot is divided into three main lines, the player is given a choice between six characters, each of which has its own storyline, its own specialization and its unique set of techniques. For the first time in the series, a system is used to change the day and night, as well as the days of the week, which, in turn, has a significant impact on the gameplay. The continuation of the so-called "ring menu", used in the previous part, when the options are displayed on the screen in the form of a circle, allows you to make a choice without a long switch between screens.
‹
›
Home
View web version