RoboCop vs The Terminator (Master System) 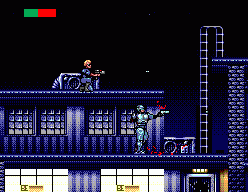 Genre: Action
Perspective: Side view
Visual: 2D scrolling
Gameplay: Platform, Shooter
Setting: Post-Apocalyptic, Sci-Fi / Futuristic
Published by: Virgin Games
Developed by: Virgin Games
Released: 1993
Platforms: SEGA Master System (MS), SEGA Genesis / Mega Drive, Super Nintendo (SNES)
This game has been executed under the influence of the big imagination of the developers who are fan at that time from over fancy movies about the Robocop and Terminator. All of them have merged in one game. Rise of the Machines - the third world threatens the peace, and instead of the next Shvartsnegger to the past send Alex Murphy - the Robocop. Super game for SEGA MS!
‹
›
Home
View web version