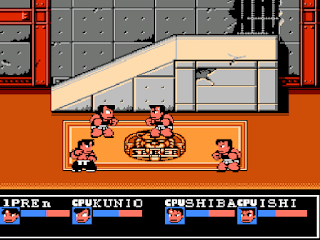 Genre: Action
Perspective: Side view
Gameplay: Arcade, Fighting
Art: Anime / Manga
Published by: Technos Japan Corp.
Developed by: Technos Japan Corp.
Released: 1992
Platform: Nintendo (NES)
Great Japanese team fighting game. Two by two, a bunch of receptions, you can also use the features of the arena for your victory. Your hero has a certain set of characteristics that can change. You pass the levels, constantly fighting with the enemies. The mode of two players on one screen is possible. The music in the game is very good.

The plot of this game is as follows: Kunio sent an invitation to the tournament "the strongest Japanese students", signed by a strange name - Double Tiger. Yes, it's like Double Dragon - but it's completely different. In Kunio, the craving for glory flares up and he goes to train with his friend Ricky. He is expected to 15 + 1 to 19 + 1 (depending on the number of defeats + final) brutal massacres.
In one battle, four fighters are always involved, in the tournament mode two people can compete with two computers, in the dezmatcha mode, four people can find out the relationship between themselves.
‹
›
Home
View web version