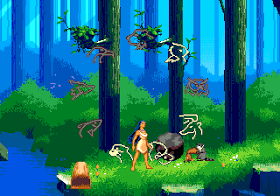 Genre: Action
Perspective: Side view
Visual: 2D scrolling
Gameplay: Platform
Published by: Buena Vista Games
Developed by: Funcom Oslo A/S
Released: 1996
Platform: SEGA Genesis / Mega Drive
The name Disney for half a century or more is a real sign of quality. Until recently, this was mainly related to cartoons, but now almost all the notable Disney characters got the efforts of the legion of programmers of their counterparts on SEGA Genesis. One of the last to join the world of video games is the famous red-skinned beauty named Pocahontas. Not one, of course, but in the company of friends, acquaintances and enemies. And, since she is a well-bred and responsive girl, she did not have many enemies - mostly just strangers, accustomed to frightening at the gun. The plot of the game in general outlines the eponymous full-length cartoon - depicts the life of the heroine in the intervals between the global events that make up the picture. Thanks to the advanced animation and ingenuity of the level planners, these events are also pretty well shown, so to speak, in real time - the management is selected for a certain period, and you are watching a small cartoon.
The only thing that is regrettable - the speech of the characters-people, with the exception of a few wails, is transmitted by inscriptions. But the musical accompaniment, as in the earlier games "Aladdin" and "Lion King", differs little from the original. There are only five melodies, but what! The tasks set for the heroes of the game, Pocahontas and her hand raccoon Meeko, are numerous and varied, but they are, in general, reduced to the following. Having reached the animal in distress, you need to help him, and then use the received bestial spirit for further advancement. In the best traditions of the remarkable game "The Lost Vikings" the mutual assistance of heroes is abundantly practiced - Pocahontas can plant or throw Meeko on inaccessible to that height, move across a wide stream, and he is able to climb a tree or use a narrow tunnel to drop a cobble-pedestal, or Hornet's nest on the head of the anti-colonist. Another Meeko knows how to process the nuts found in the letters of the password - collect them pieces of twenty nuts and the passage of the next level can be postponed for a while.
At the beginning of the game Pocahontas walks in his native forest, and nothing threatens her. If you find problems with finding a way, the game will certainly give a hint. Releasing the deer with a wave of the hand (button A), the girl gets the ability to run (on the move press A), and very quickly (press A twice) and dexterously. Running on the staggering log, you will meet the otter - roll the stone that separates them into the water and then learn how to swim and dive. Including, from high cliffs. Take Meeko to the log on the lake. So that he could cross the tree through the bush, you have to grind the birds to the other side of the island, swim under it. Having fallen from a great height, the girl will strongly hurt - so that this does not happen, return the nestling to the nest (press, squeeze, button A to pick it up and put it back in place). In the future, do not be lazy to collect feathers - without them the bird spirit is powerless. At the end of the level, Pocahontas will be met by his father. They will go into the hut to talk about a possible marriage and will not return until Meeko does not guess to climb inside through the hatch on the roof. About the arrival of foreigners, there is still no rumor or spirit, and the couple are restless again goes to the forest - to visit Old Willow. Then there will be a race with the wolf, a meeting with the kind colonist John and a romantic tour of the Indian possessions. The third level is a night walk to the aliens camp (with the help of load and lift, deliver Meeko to the deck of the ship.) Following the subsequent uproar and the fervent meeting of John, his lover and her ex-fiance Kokuma, Father Pocahontas accuses the pale-faced in the death of a jealous Indian, and the girl in a few minutes must overcome a dangerous distance, using the acquired abilities for the sake of saving the loved one in full. "The reward for this heroism is small - John still sails home, and the poor, abandoned Pocahontas humbly stands on the cliff.

In order for the hunters to become friendly and not shoot Pocahontas, enter the password: Bear + CH1PV.
View the ending of the game you will be given a password: Wolf + GLRSN.
Levels passwords: 2. Fish + FGFCR, 3. Platypus + C1V86, 4. Eagle + 4FV1R.
‹
›
Home
View web version