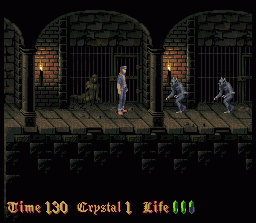 Genre: Action
Perspective: 3rd-person, Side view
Gameplay: Platform
Narrative: Horror
Published by: SETA U.S.A.
Developed by: SETA Corporation
Released: 1994
Platform: Super Nintendo (SNES)
If such cult games as Prince of Persia, Flashback, Blackthorne with their acrobatic gameplay came out on different systems, then Nosferatu, except as a Super Nintendo platform, did not appear anywhere else and is also an incomparable hit of its time. Whether he surpasses the above mentioned games is difficult to say. However, the story here is no less exciting. The adventure is no less interesting. The design is also beyond praise. And the concept of the game is completely different. The whole story is built on survival among hordes of diverse evil spirits. All that we are given against them is only hands and feet and apparently a great experience of studying martial arts behind the shoulders of our hero. To apply all these movements is not less exciting than fencing in Prince of Percia, to shoot a pistol in Flashback or a shotgun in Blackthorne. All movements are very diverse and realistic and to see each time, as the leg rises to the muzzle of another ugly ghoul, one simply can not look without burning attention. The game is also built on all sorts of jumps, on clinging to the cornices, on climbing up and other all sorts of acrobatics. Games with such gameplay almost always became hits and Nosferatu is no exception, giving gamers their concept, history and adventure with chic atmospheric music. Depending on what complexity you choose, the final quote from the intro will change.