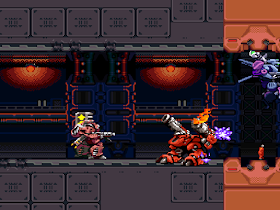 Genre: Action
Perspective: Side view
Gameplay: Platform
Vehicular: Mecha / Giant Robot
Setting: Sci-Fi / Futuristic
Published by: Konami (America)
Developed by: LucasArts Entertainment Company LLC
Released: 1995
Platform: Super Nintendo (SNES)
In the future, terrorist wars will move to a new stage of development. Special state organizations, like the criminal syndicates themselves, will use the power of high-tech mechanized suits, which transform the army from ordinary people into an army of mass destruction, the so-called Metal Warriors. If anyone has not guessed, then we will talk about the best representative of the genre of giant robots and random shooting.The metal warriors of the United Government in 2102 are under siege of perfect criminal power, called Dark Axis, led by a leader known as Venkar Amon. The confrontation of giant robots in this game will unfold in the most diverse corners of the universe. After the successful completion of several missions in space, the United Government directs us to Alaska to destroy the firing ground facility in order to allow the ships to land and to build up resistance on Earth. These missions will include an attack on objects in the jungle, fighting in bombed cities and capturing underground mines. While in other similar games, it was necessary to remain in the same technique until the very end of the story, such as in the no less worthy game about Mech'a - Assault Suits Valken / Cybernator, there is an opportunity to leave the car and use a variety of other mechanized Up to six experimental species. At any time in a tense situation, you can abandon a damaged suit and try to find yourself a new one, allowing you to continue to fight in this game. Instead of a line of health, it shows the weariness of your machine with any progressive damage, including first dents and holes, then loss of arms, and, as the final result, death. All six represented Mech types are unique in form and function. Do not deprive yourself of the pleasure of playing this unique game, including in the mode for 2 players.
‹
›
Home
View web version