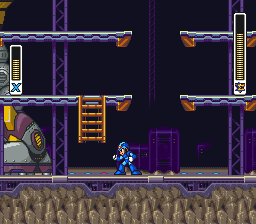 Genre: Action
Perspective: 3rd-person, Side view
Art: Anime / Manga
Gameplay: Platform, Shooter
Setting: Sci-Fi / Futuristic
Published by: Capcom U.S.A.
Developed by: Capcom Co.
Released: 1995
Platform: Super Nintendo (SNES)
This game is a direct sequel to Mega Man X, which was released a year earlier. The events of Mega Man X2 unfold in the near future, in which people try to coexist peacefully with robots calling themselves "Reploids", some of whom become Maverick and threaten civilians. The main character is the android Mega Man X, who saved humanity from the villain Sigma (English Sigma) six months earlier. He fights against three singles who call themselves X-Hunters.Gameplay Mega Man X2 is similar to the gameplay of previous games of the series and contains many elements, traditional for games of action genre and platformers. The task of the player is to go through a number of levels, destroying enemies, gaining various improvements and special weapons after defeating the boss at the end of each location. As in Mega Man X, a player can receive special abilities, finding additional pieces of armor. Graphics Mega Man X2 is also similar to the graphics of its predecessor, but the developers of Capcom added a game cartridge chip CX4, which allowed to use some of the 3D frame effects.Graphics, sound and gameplay Mega Man X2 received positive reviews from critics. However, a number of journalists were disappointed by the small number of differences in the game from the previous part. Mega Man X2 was included in the collection of Mega Man X Collection for consoles Nintendo GameCube and PlayStation 2 (PS2), which was released in North America in 2006. The game was also released for mobile phones in 2008 in Japan and in 2009 around the world, as well as for the Wii Virtual Console in 2011 in Japan and in 2012 around the world.

Mega Man X2 - a game in the genre of action and platformer; The gameplay is similar to Mega Man X and other previous games of the series. The player controls a protagonist named X. The task is to go through eight levels and destroy the encountered enemies. All levels are 2D, the order of their passage is chosen by the player. Initially, the main character has the following abilities: running, jumping, rolling and shooting from a hand gun, which is called "X-Buster". The player not only destroys enemies, but also overcomes various obstacles: bottomless pits, thorns, lava and others. As the game progresses, the player can receive additional lives and items that restore health and replenish ammunition. At the end of each level you need to defeat the boss; After defeating him, the player receives a special weapon - it can be used on the following levels.