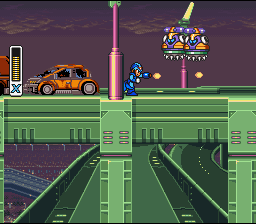 Genre: Action
Perspective: Side view
Visual: 2D scrolling
Gameplay: Arcade, Platform, Shooter
Art: Anime / Manga
Setting: Sci-Fi / Futuristic
Published by: Capcom U.S.A.
Developed by: Capcom Co.
Released: 1993
Platform: Super Nintendo (SNES)
Mega Man is back to business. True, not the Mega man that we know by eight-bit parts. Here the case occurs a hundred years later, and the hero's name is X (although, if you want, you can call Mega Man, he will not be offended) Zlodeyev in the future is no less than in the present, and therefore Iksu has to work properly with his wrist gun and received from enemies Weapons. A brave robot crushes crowds of enemies and bosses, doing good and justice. The main gameplay difference of Ix from the classical Mega Man is the ability to cling to walls and, pushing back, climb to any height. The graphics are excellent, the gameplay is gorgeous.

The action of Mega Man X occurs indefinitely during the 22nd century (21XX year), and approximately 100 years after the moment of the last incident. Archaeologist Dr. Cain discovers in the ruins of a research center, in which once worked the legendary developer of the robot Mega Man Dr. Thomas Light. Among the ruins, Kane finds a large capsule, which contains a very advanced robot with a human level of intelligence and emotion and even free will. Dr. Light wanted the new robot to have common sense and understanding of the controversial aspects of human morality. Kane for several months studied a robot, which he called Mega Man X or simply "X" and decided to duplicate it.
Soon, the first release of the reploids, robots, which can think, feel, learn and grow, as well as humans, takes place. During the year mass production of reploids was established. Nevertheless, with the free will to the Platoids, the possibility of criminal activity has come, such reboids have become outcasts, they have been branded as Mavericks.
Since public protests against several incidents with the Mavericks become too large to ignore their appearance, the government, on the advice of Dr. Kane, forms the elite of the military police called Maverick Hunters. Hunters seize or cut off any reploid who pose a threat to people, suppress the insurrections of the mavericks, and perform other tasks as necessary.
Kane designs a very advanced reploid named Sigma, almost invulnerable. Sigma takes control of a small island, surviving all the members of the human race. Claiming that people limit the growth and potential of the reploids, he calls on his supporters to begin mass extermination of people. Mega Man X, feels guilty for being an accomplice to such a dangerous race, joins forces with the "Hunters on the Mavericks" and with his Zero supporter who he was awakened by the unknown to stop Sigma at all costs.