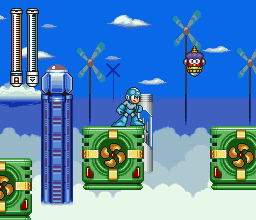 Genre: Action
Perspective: Side view
Visual: 2D scrolling
Gameplay: Platform, Shooter
Setting: Sci-Fi / Futuristic
Art: Anime / Manga
Published by: Capcom Entertainment
Developed by: Capcom Co.
Released: 1995
Platform: Super Nintendo (SNES)
Another series of Rockman's adventures (he's also Mega Man). He uses his quick-fire mega-basser to defeat his enemies. The mechanical dog Rush also helps the hero, which turns into a spring and an aircraft, and also searches for land prizes. Rockman, as always, is opposed by the insidious doctor Vaili and crowds of robots - his creatures. We will also meet a certain robot named Bass, but who is this and what he wants is a mystery so far. There are plenty of secrets at levels, not the fact that on the first pass you will find them all. The graphics in the game are not bad, the music is excellent.

After the sixth defeat at the hands of Mega Man, Dr. Wylie was behind bars. The world reigned again. But...
Wiley was always ready for an unexpected turn of events: he secretly created four new robots, which after six months were activated themselves and freed him from prison. The escape of the evil genius was noticed by Mega Man, and he followed him. The hero was waiting for a surprise: he had to fight with a mysterious robot in black armor and his wolf-like companion. A minute later, Mega Man recognized their names: Bass and Treble. The first told the hero that they decided to fight with Dr. Wylie, while that was not.
Destroying the four robots, Mega Man received news from Dr. Light: The Robots Museum was attacked! He hurried there, but Wylie had already picked up GutsMan. The mad doctor set a giant clown robot against his old enemy and disappeared. Mega Man destroyed the clown. But that was not all: Wylie had managed to prepare the next four robots.
During the adventure Mega Man again encountered Bass. He was damaged, and he decided to leave Wylie to his recent rival, who offered him repairs in the workshop of Light. Bass agreed. This became the fatal mistake of Mega Man: after returning home, he saw the destroyed laboratory... According to Light, Bass stole the plans of the Super-Adapter. Mega Man could not believe in the betrayal of his newfound friend. And immediately appeared on the monitor, Dr. Wylie revealed the truth: Bass and Treble - his creatures! This further angered Mega Man, and he went to the new fortress of the evil genius.
Before the fight with Wylie Mega Man twice fought with Bass: he first was in normal form, and then in the form of a Super-Adapter. This did not help him stop the mechanical hero.
Dr. Wylie was again defeated, and he begged for mercy. In anger, Mega Man charged his blaster, preparing to kill his eternal enemy... but the castle began to collapse: pieces of armature fell on the doctor. Bass and Treble saved Wylie.

Mega Man 7 - the first game of the series, released on SNES. Unlike the first six 8-bit games, the seventh part got a new 16-bit graphics and a high-quality sound. Among the differences are large sprites of characters, secret mode for playing for 2 people, etc.
The most important innovation is a store that allows you to purchase the necessary things (for example, extra lives). "Currency" in it is the so-called "Bolts". Bolts can be found on levels, and they also drop out from enemies.

Way for secrets and the composition of the word Rush

In the Freeze Man level, you will need to climb up the ladder and jump to the left on snow-covered platforms, where you take the letter H.
In the Burst Man level, you will need to climb up to the platform with a lift and take the letter R.
In the Cloud Man level, you need to find an invisible ladder in one place (when you stand next to it, it will become visible), use R.Coil to jump on it, climb up it, there on the upper right 1-Up, and to the left invisible platforms (Also become visible when you are next to them), on them reach the letter U. Also at this level there is a ladder, which you can jump with R.Coil, there at the top there will be a conversation with Proto Man.
In the level of Junk Man you will need after the first elevator, you take the Freeze weapon and shoot the lava, it freezes and collapses, then you jump down, on the left you see the letter S, for this you freeze the lava and make your way after the letter S, You RUSH or S. Adapt, with the help of it you can easily fly the chasms, but it's not yet - you all need this level again, because in this level along the usual path (not through the lava) you have to go for R.Jet, For this you come to the elevator shield, above it is still written ac 100V, shoot it T.Bolt and rise to these elevators the stairs, run into the room where lay R.Jet and takes it.
In the level of Turbo Man you need in the middle of the level where you have to climb stairs and a number of traffic lights, climb one screen up, jump there for a traffic light, use R.Search and Rush dig out the PU there - this is a device for S. Adapt, a homing fist, Further you rise higher, turn right - this is a secret room, here you communicate with Proto Man.
In the Slash Man level you need to climb the stairs, go to the last tree and set fire to its Wheel, after which it will burn and it will be followed by a ladder, jump to it with the help of Coil or S. Adapt and climb to the top, go to the right you see in the cage birdie Beat, you will be able to break the cage only with your usual weapon and here's the birdie is free, now you have a Beat helper.
In the level of Spring Man, you need to climb up the dangerous turning squares up, then along the springs, near the 1UP you see on the left there is a partition it needs to be moved, for this you jump on the squares, there the arrow is indicated, where it will be beat, after waiting, after the square is blinking He pierces the wall, you run there and take a giant bolt, it's a lost bolt Auto, now the store costs half as much.
In the Shade Man level, you will need to kill the pumpkin, and if you shoot it inside, it will pierce a hole in the ground, if its appearance - it explodes into the wall to the right, if you destroy its appearance, you will find a portrait of Doctor Vaili in the guise of a vampire, You use R.Search, and Rush will dig out Energy Balancer there, and if it's inside, then dropping down one screen, go to the right, there's a wall, but it's fake, you can go through it without using anything, If you in both levels Cloud Man and Turbo Man saw Proto man, then you have to deal with him tsya (charged blaster attack protomai interrupts), lead, and he will give you his Proto Shield.