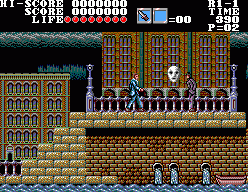 Genre: Action
Perspective: Side view
Visual: 2D scrolling
Gameplay: Platform
Narrative: Horror
Published by: SEGA Enterprises Ltd.
Developed by: SIMS Co.
Released: 1992
Platform: SEGA Master System
The shadow of Count Dracula hung over Victorian England. The only one who can track down the villain and free the country from his nightmarish power is Dr. Social, managing which the player will have to overcome the mysterious streets of London and crammed warehouses similar to the dark caves, fight the vampire king's minions and, in the final battle , Defeat Dracula himself.

The gameplay of the game is almost completely copied from Castlevania, a popular game for NES: identical control, oblique ladders, bonuses falling out of objects hanging in the air and other similar elements. Only the events of the game occur in a more modern world, instead of a whip, the protagonist is armed with a rapier, a spear, a pistol, etc. Just like in Castlevania, the protagonist uses two types of weapons: melee weapons and additional throwing or firearms, In order to take advantage of it you have to press the attack button and up simultaneously.
The game is divided into five levels, each of which is divided into three stages. At the end of each level, the player will meet with one of Dracula's henchmen. The design of the game locations is sustained in a gloomy style appropriate to the spirit of the game: the streets of night London, the wax museum, the cemetery, the sinister laboratory and, at the end, the lair of Dracula himself.
‹
›
Home
View web version