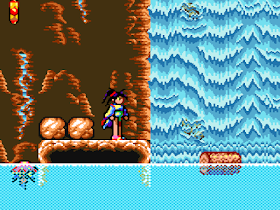 Genre: Action
Visual: 2D scrolling
Perspective: Side view
Art: Anime / Manga
Gameplay: Platform
Setting: Fantasy
Published by: SEGA Enterprises Ltd.
Developed by: SEGA Enterprises Ltd.
Released: 1995
Platform: SEGA Game Gear
Curious platformer. Levels can be played as a guy with red hair who can attack both Sonic and a girl who owns the magic of fire. With the bosses we fight in a mode similar to a fighting game. Passed levels allow you to advance further on the map, if you want, you can return to them.The game is based on the anime series, consisting of 51 series. The title of the series is translated as Zenki, the Demon Prince, and its popularity allowed to release the game in the same year as the series itself!A thousand years ago, all the ranks of evil creatures surrounded the Earth. Only the high priest, Ozano, could control the demon defender named Zenki and defend the world. Concerned by the sad thought that no one else can manage the destructive Zenki, Ozano sealed the creature in a stone statue before his death.Our days. A young priestess named Chiaki Ozuno reveals the monument. Strange demonic objects, known as the Seeds of Evil, emerged once more, and with them came the threat of death for all of humanity. Chaiaki's only chance is to call Zenki! Will she find a way to manage it, or will the Earth help nothing?Interestingly, PC-FX released the same game Kishin Doji Zenki: Vajura Fight, fighting game, and for SNES there are three versions of the game based on the manga!
‹
›
Home
View web version