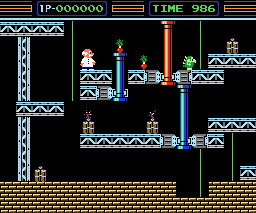 Genre: Action, Puzzle
Perspective: Side view
Gameplay: Platform
Published by: Nintendo of America Inc.
Developed by: Nintendo Co.
Released: 1985
Platform: Nintendo (NES)
"Gyromite" is one of two games in the series of robot games "Nintendo's Robot Series", the second product - "Stack-Up" (1985).
"R.O.B." - robotic controlled buddy, which was an additional device for the 8-bit console "Nintendo". It was released in Japan in 1984 and was called "Famicom Robot", and in the USA - in 1985 under the name "R.O.B.".
In the US, "Robotic Operating Buddy" was sold in two packages. The first one is "NES Deluxe Set", which included a game console, NES Zapper (light pistol), two joysticks and 2 games: "Duck Hunt" and "Gyromite". Another package included only "R.O.B." And the game "Gyromite". At that time "R.O.B." Was not massively produced, since it was compatible only with two games, which were also childish and uncommon.
The main goal of the manufacturer in the release of "R.O.B." - to return the interest of home users to games after the market crash in 1983. Retailers in 1984 were reluctant to buy video games because of the huge losses they suffered during the collapse of the industry. Nevertheless, they quite willingly bought "R.O.B." (Together with NES), since these devices were positioned not as video games, but as "robot games". This trick worked, which was for "Nintendo" the main point of support in the western market. The robot functioned, receiving commands in the form of light flashes from the TV screen. The head was always pointed at the screen, and the hands moved left, right, down and up, also they could move together or separately to control the objects attached to the base.
During the game in "Gyromite", tied to the basis of the robot "R.O.B." Holds and presses buttons on the usual joystick. In "Stack-Up" the prospective player presses buttons on the robot or on his joystick to indicate when the robot finishes the task. The games of the robot series were one of the most difficult games of that time (besides it was completely unripe), so gamers often had to play them simply on the joystick, without the help of an assistant in the person of "R.O.B.". On the other hand, some consumers considered "R.O.B." Only as a novelty, and not a really useful device, because the low speed with which "R.O.B." It was a source of constant frustration. For example, in "Gyromite" it was absolutely easier to play with the joystick, rather than how to manage the game in the intended way.
The main characters in the platform "Gyromite" Professor Hector and his assistant Professor Vector (Vector) move with the help of "R.O.B.", which helps them to climb onto different platforms (comprising several levels), connected by ropes.
There are two versions of the game:
The professor must collect all the dynamites before the time expires on the timer. At the same time he is hindered by small monsters, and there is no means for their destruction. But, weapons are not needed here, as opponents can easily outwit, dropping and raising the blue and red pistons.
The professor walks in a dream like a sleepwalker (and at the same time he climbs along the ropes and falls, without waking up at the same time, always going strictly from left to right). Omitting and picking up the pistons, one must lead our hero, so that the monsters do not touch him.
The game "Gyromite" is aimed at both speed and logic. It could have liked many people in the 80's and 90's, and now, if not for one "but" - the management in it is very inconvenient. This is a consequence of the fact that the game was developed specifically to work with the accessory "R.O.B", which in 1986 was not easy to buy. What can we say about today! Although the emulators also have the support of "R.O.B.", but still playing in the original with the participation of the robot was much more interesting. By the way, according to the main criteria, the game is clearly below average. A high score from us, she gets only for the support of robotic functions.
‹
›
Home
View web version