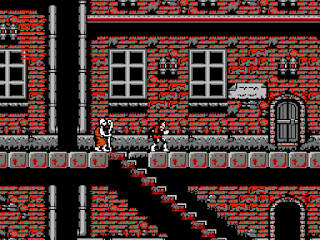 Genre: Action, Role-Playing (RPG)
Perspective: Side view
Visual: 2D scrolling
Gameplay: Metroidvania, Platform
Setting: Europe, Fantasy
Narrative: Horror
Published by: Konami
Developed by: Konami Industry Co.
Released: 1988
Platform: Nintendo (NES)
Seven years after defeating Dracula, Simon fell under the curse of Dracula, and he was tormented by infernal pains all over his body. The only way to remove the curse is to resurrect Dracula and destroy him again. This will become the goal of the game - to travel through different castles and collect parts of Dracula, collect them together, revive the Earl and defeat him in battle.
The game "Castlevania II: Simon's Quest" is a continuation of the first part, but it changes the genre of the game from the usual platformer to the quest. Now Simon must, traveling to different localities, solve puzzles and different tasks, buy weapons and items.
The currency in the game are hearts that fall out of dead enemies. The game has a mode of changing the day and night, which switches every 5 minutes a night for a day or vice versa. At night, enemies become more aggressive and stronger, and shops in cities are closed. There is no time limit in the game, but the length of the game depends on the end of the game. The main character has 3 lives and 3 continuations. If you die, you appear in the same place where you died.
In the game there is a currency system, these are the hearts. They fall out of dead enemies. If you lose all your lives, you lose all your hearts.
The Belmont whip during the game can be replaced by others:
Studded whip. It is slightly longer than the base, and covered with spines.
Chain whip (very powerful).
Morning Star. Longer and more powerful than the chain whip.
"The whip of fire." The most powerful whip in the game, kills any enemy with one hit. To receive it, you must have the Morning Star in service.
It is noteworthy that the game has 3 different endings. They depend on how much time you spent playing:
Bad. You defeat Dracula, but you still get the poison, and Simon dies at the end of the game. To get this ending, pass the game as slowly as possible. At the end there will be a gray screen with a grave, without Simon.
Standard. You defeat Dracula, bury him, but die from poison later. This is the end of the standard, go through the game at the usual speed. In the end there will be a blue background, Simon stands.
Good. You defeat Dracula and successfully heal. In the end there will be a red background, Simon stands.
The European version does not differ from the American one, but it came out later, and some spelling mistakes were corrected.
In general, the second part of the game was not so enthusiastically received as the first and third, but it is nevertheless a very high-quality product. I will give an example of estimates for individual components taken from the review from the GameFAQs website: history - 8, gameplay - 9, graphics - 7, sound - 10, control - 8, total score - 8 points out of 10 possible.

The first thing you do in the city is buying a crystal (right). Move then all the way to the right, and you will find yourself in the palace of Dracula. Here it is necessary to find his bone. You will use it later as a means of protection.

In another city near the palace you will meet a warrior who will exchange your white crystal for blue. After that, head to the right and, taking a blue crystal, bend the knee on the shore of the lake. Your prayers will not be in vain - a passage will appear over the lake.

In the palace on the right you will find the heart of Dracula. After doing this, go back to the starting position and move to the left. When you get to the gate, show the heart to the carrier (but do not give it back!).

In it is the eye of Dracula. The carrier will take you here. He will change the blue crystal for you to red. At Death, take away the gold dagger - you will be able to kill Dracula in the final.

Continue to the left until you reach the mountain. Standing with a red crystal kneeling in front of the mountain. You will wait for the appearance of a whirlwind, which will take you through the mountain, to the fourth palace. The red crystal will also help you see the lifting platform at the beginning of the Berkley Mansion, not visible without it.

In this palace Dracula's nail is kept. Leaving the palace, go left. The peasant you meet is likely to try to kill you. If you have not stinted earlier and bought yourself a star for two hundred hearts, then his insidious plans will not come true.

Continuing to the left. You will find yourself in the fifth palace with the signet of Dracula. Here you need to kill the Vampire mask to get the cross. Going down the big stairs. You will be in the cemetery. If you put garlic here, Death will come out and offer the thing you need. The upper bricks of the bridge can be broken using holy water.

Go down the stairs and kill the count with a golden dagger from the palace with Dracula's eye. The grave of the king of vampires symbolizes the happy end of the game.

How to find a lift in Berkeley Castle

At the very beginning of Berkeley Castle there is a hidden moving elevator. To make the elevator full, Simon should choose a crystal. If he does not have Crystal in his hands, we will not see the elevator.