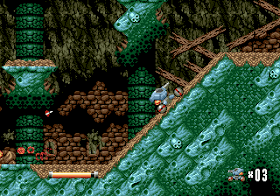 Genre: Action
Perspective: Side view
Visual: 2D scrolling
Gameplay: Arcade, Platform
Setting: Sci-Fi / Futuristic
Vehicular: Tank
Published by: Sun Corporation of America
Developed by: Software Creations Ltd.
Released: 1993
Platform: SEGA Genesis / Mega Drive
An unusual platformer-shooter, the continuation of the first part of the Blaster Master. In the game, we control something like a robotic tank on the wheels of S.O.P.H.I.A. Fourth generation, model 2000. We have to destroy many enemies, the cannon can shoot forward, backward and upward, just as we go through the game we pump out SOFIA and take various Power ups. The plot of the game begins four years after the last game. Jason Frudnick hid Sophia in the barn. But something is going on here that is not understandable, and to fix it people start digging the shaft to the center of the earth to change the axis of its rotation. But this only worsened the situation. Jaysan slightly modifies SOPHIA and goes again to save the situation. The game also has a game with a view from above, something remotely reminiscent of Battle City only with scrolling, and a more thoughtful map. Also in some levels we have to play as a pilot of this robot.
‹
›
Home
View web version