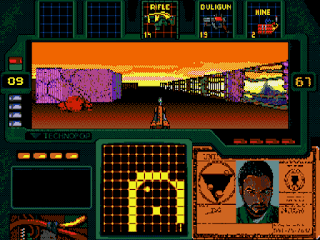 Genre: Action
Perspective: 1st-person
Gameplay: Shooter
Setting: Sci-Fi / Futuristic
Published by: Accolade
Developed by: Technopop
Released: 1995
Platform: SEGA Genesis / Mega Drive
This is a sequel to the great FPS game Zero Tolerance - which unfortunately never saw the light of day. Since only the Beta version of the game has been released. Which is not very playable since it will not be possible to pass it. The game has sunk into many souls so much that now it is being edited and improved by romhackers. So in the near future everything will be corrected. Many people may not understand the pink picture in the game, but you quickly get used to it. The game could be a good hit.
The game takes place in 2095. You choose one of five characters and go to the cleanup. There are few weapons on the maps, and the monsters are strong enough. After clearing the floor, take the elevator to the next floor.
The game is also called: Zero Tolerance 2.

Transferred 24 maps from the first part of Zero Tolerance. In the 3rd episode, 6 maps were transferred, but most of them were only 80-90% due to the small size of the level and trains (in the continuation - an analogue of the elevator). Also moved the last map of the 2nd episode from the original to the 6th level of the 2nd episode of Beyond Zero Tolerance (by about 70-80%).
As a result, although not all 24 levels are completely transferred, but what is transferred corresponds to the original. A background has also been added instead of the ceiling on the first level, and the player now starts the second episode in a completely different place + weapons and first-aid kits have been added to the game (behind the maps or in the place of the elevators on the map).
‹
›
Home
View web version