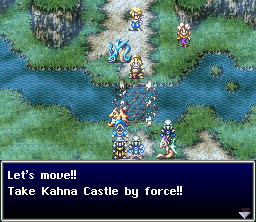 Genre: Role-Playing (RPG), Strategy / Tactics
Perspective: Bird's-eye view, Side view
Pacing: Turn-based
Setting: Fantasy
Published by: Square Co.
Developed by: Square Co.
Released: 1996
Platform: Super Nintendo (SNES)
One of the best RPGs from Square, brilliantly combining the world of knights and dragons. Secrets and intrigues, romance and betrayal and much, much more are waiting for you in this epic. Dragons here play far from the last role, you need to educate and disclose in them the potential, increase it and guide it in the fight against the warring factions. Power and strength are important elements, but cunning and skillful strategy, that's the guarantor of victory! Here it is necessary to deftly manage resources to achieve a positive result. The game not only perfectly combines elements of such cult RPGs as Shining Force and Final Fantasy III / VI, but also adds its phenomenal innovations. A decent game, will fall in love with all lovers of role-playing games. Graphics and music are executed, as already accepted for SNES, beyond praise. Be sure to play this game, although it came out only in Japan, there are enthusiasts who still translate the old games into English so that you will know all their splendor.
‹
›
Home
View web version