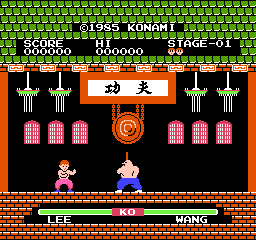 Genre: Action
Perspective: Side view
Visual: Fixed / Flip-screen
Gameplay: Fighting, Martial Arts
Published by: Konami Industry Co.
Developed by: Konami Industry Co.
Released: 1985
Platform: Nintendo (NES)
This game from Konami tells us about the adventures of a young adherent of the style of kung fu. He performs at the tournament and defeats various opponents (or not depends on you). The game is a good (and one of the best on Famicom / Nes) fighting game. The hero is able to strike punches and legs, to beat in a jump. But do not stand in the corner and, holding the turbo button, wait for victory. Opponents are cunning and do not want to yield.