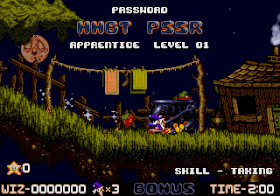 Genre: Action
Perspective: Side view
Visual: 2D scrolling
Gameplay: Platform
Published by: Psygnosis Limited
Developed by: Raising Hell Software
Released: 1993
Platform: SEGA Genesis / Mega Drive
The game is a colorful and dynamic platformer with a quality soundtrack and virtually no violence and enemies, except for the bosses at the end of each episode. The entourage of the game abounds with objects and creatures of Western folklore, and, almost every level has its own specific theme.

The place of action of "Wiz 'n' Liz" is the magical planet Pum, which is inhabited by so-called creatures - "wabbits"; In fact they are the most common rabbits (from English Rabbit - rabbit, in the course of the game the first letter "r" will be replaced by "w".) One night, wabbit'y are kidnapped by someone .The poor gray Wiz magician and old Witch Liz.

The player's task is to bring the rabbits back, traveling from level to level, each of which represents a certain dimension with a characteristic theme (snow, desert, cemetery, etc.). To complete one or another stage it is necessary to fill a kind of scale, collecting rabbits scattered throughout the stage and many other bonuses, including fruit / berries / vegetables; At the end of each episode (which consist of several levels described above) you will need to fight with the boss. In addition, the gameplay "Wiz 'n' Liz" has a number of other characteristics.

Structure of the game

There are 4 main, main levels:
Each level contains a certain number of episodes, which in turn consist of 8 sublevels (worlds, countries, dimensions):
As the sublevels pass, the next one will be more complicated than the previous one, for example, it will be necessary to collect more wabbit's or from them there will be a more frequent passing object such as "empty letter" and others like it. All sublevels are divided into rounds; The minimum number of rounds is 2. The number of rounds increases with each episode.
The round at the passage on any of the levels consists of two parts. In the first player it is necessary from the dropping letters (see below), to collect the "magic word". When the word is collected completely, the counter of the remaining rabbits is switched on in the middle of the screen. After the required amount is collected, the first door to be opened is opened - the exit from the sublevel.
The level of "Apprentice" consists of only one episode; Wizard of two, Sorcerer - three, Super Wizard - four.
Also, there are three levels of difficulty, in "Wiz 'n' Liz" they are called skill. There are 3 "skills" available:

The level of Training is much simpler than the other two.

The game starts in a neutral space, which is a glade with a house (judging by the signed towels on the clothesline - this is the house of Wiz and Liz), a large cauldron standing nearby, a forest nearby, and a couple of soaring fruits in the air. After mixing the latter in the cauldron, a door hanging in the air will appear on the side of the house - this is a passage to another neutral dimension, where on the iron tracks you actually select the level, hopping into one of these doors.
Door, boiler, fruit - an important part of the gameplay. During the passage of levels there is an opportunity besides saving wabbit'ov, to take back a few fruits. When a player appears in neutral territory, fruit / berries / vegetables will hang near the boiler under the tree crowns. When mixing a certain combination of fruits, this or that event will occur: either neutral (joke-event), or carrying a positive (built-in game, bonus, extra-life, etc.) or negative effect (death, distractions at the level, etc.). ). One of the main such events is the appearance of another door - the entrance to the store. The currency in the Pum world is asterisks, which are also collected during the passage of any of the levels. In the store you can buy the above-mentioned fruits, or sell them for a certain number of stars.
At the end of each episode (see "Structure of the game"), you have to fight with one of the bosses, some of which are depicted on the cover of the game. During the battle button "A" begins to perform the function of attack; Battle with the boss - this is the only period of the game during which the player can attack (except for mini-games that are not related to the storyline). Each boss has its own unique behavior and has its own "weak spots", with the defeat of which it will be destroyed.

There are a lot of objects and objects in the game: wabbit (blue, red, green, bonus and "critical"), letters (whole, empty, bonus letters), stars, clocks, fruits and an extra-time ball.
Wabbit - a copy of the earth rabbits, victims of an unknown kidnapper. To complete the sublevel, first you need to collect all the letters of the magic word (see below) that drop out when you touch the rabbit. Then the counter is turned on, indicating the required number of wabbit's to unlock the output from the level. When mixing certain fruits in a pot, rabbits can be painted in a specific color: red, blue and green. They differ in price for one rabbit. Bonus rabbits appear at the level after the player collects the word BONUS from the bonus letters (see below) and at the end of all rounds of the current sublevel will play an additional bonus round.
There are several types of letters in the game:
Ordinary - constitute a "magic word", after the collection of which begins the second sexual sublevel.
Empty - just drop out of wabbit'ov, but unlike usual - each such letter removes the corresponding to it from the "magic word", as a result, even in the second half of the sublevel, the account of the collected rabbits stops and the player is forced to re-search for the lost letter. With each following sublevel, "empty" letters will fall out more and more often.
Bonus - drop out much less often than others and painted in a brighter blue. Make up the word "BONUS", which is collected completely, the player at the end of the episode falls on the bonus level.
Fruits (also called ingredients in the game) start to drop out of rabbits after all the letters of the magic word are collected. To carry fruits to your home under the crowns of trees, you need to collect them so that the scale in the lower right corner of the screen is completely filled.
Fruits are contained in the game in the number of 14 species and can be mixed in different combinations (including two identical ones), but always in pairs. The total number of possible combinations is 105. Each combination gives a unique result (or spell, with English spell). One of the notable results is the opening of the passage to one of the mini-games: "spots", "snake", "galaxy" and many others.
The price of fruits increases with each subsequent episode (after the victory over the next boss).
Stars - they serve as a kind of "currency." In a store for a certain number of stars you can buy this or that fruit. With that, the price with each episode will grow.
Clock - collected at the level are added to the time of 3 additional seconds at the end of the round. The watches bought in the store are added to the total time of 5 seconds immediately.
Extra-time is represented in the form of a gold coin (ball) and falls out literally in the last seconds of the round. If a player manages to notice and catch a gold coin (and this is not so easy), then to the total time are added as many as 30 additional seconds.

In the world of Pum night always reigns, and in the sky the Moon with pronounced physiognomy drows.
The first letter "r" is everywhere replaced by "w" (from the English Wizard - the wizard), which stylizes the game universe "Wiz 'n' Liz" under the theme of magic and gives the player to understand that even the rabbits he rescues are not the same as in Real world.
The game can contribute to the expansion of the English vocabulary of the player; All the fruits are signed, and on the subject of the levels it is not difficult to guess how their names are translated.
‹
›
Home
View web version