The Legend of Zelda: Oracle of Seasons (GBC) 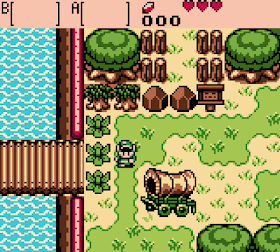 Genre: Action
Perspective: Top-down
Visual: 2D scrolling
Gameplay: Metroidvania
Setting: Fantasy
Published by: Nintendo of America Inc.
Developed by: Capcom Co.
Released: 2001
Platform: Game Boy Color (GBC)
Seasons begins when Link feels the call of the Triforce, which is inside the Castle of Hyrule. Link approaches and is teleported to a dark forest where he meets a group of travelers led by a dancer named Din. After welcoming Holodrum, the sky is covered with dark clouds. A voice from the clouds goes to Din as the "Oracle of the Seasons" and appears as Onox, General of Darkness. Next, a whirlwind absorbs Din and transports it to the heights; The rest were pushed to the ground. After the clouds dissipate, Holodrum stations begin to change rapidly.
Din's wife, Impa, tells Link that they are going to Hyrule and advises him to visit the Maku Tree in the village of Horon, the capital of Holodrum.8 Link finds a sword in a cave and goes to the tree. The Maku Tree tells Link that he needs the eight "Essences of Nature" and then gives him the "Knobby Key", note 1 that opens the dungeon containing the first Essence. Link must get the eight Essences, hidden in eight dungeons throughout Holodrum and Subrosia, an underground world, to deliver to the Maku Tree. The tree will use them to create a "Great Seed Maku", a sacred seed that purifies the evil, allowing him to enter the castle of Onox. Link enters the castle and defeats Onox. Rescue Din, who tells him that he is now a true hero and must overcome a new challenge soon.10 The Birova twins, observing the situation from a distance, argue that the "Flame of Destruction" has regained its power thanks to the troublesome Onox , Who has strengthened it.
‹
›
Home
View web version