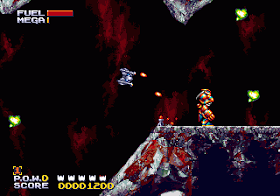 Genre: Action
Perspective: Side view
Visual: 2D scrolling
Gameplay: Shooter
Setting: Sci-Fi / Futuristic
Vehicular: Flight / Aviation
Interface: Direct Control
Published by: SEGA Enterprises Ltd.
Developed by: Zyrinx
Released: 1993
Platform: SEGA Genesis / Mega Drive
I know only two games of the company Zyrinx, but both (the second - Red Zone) - masterpieces, which are few. Impressive cutscene, detailed graphics, carefully designed missions and optimal instruction in front of each of them, a decent level of complexity. Music is a tough techno, the performance is faultless. In short, the dream of any podnabravshegosya experience gamers. Beginners, however, should once again assess their strengths before acquiring them. In the start menu you can completely (!) Change control, get used to it in training mode and choose one of three difficulty levels, but ... it would be much more accurate to change the set of gradations Easy / Normal / Hard to Hard / Very Hard / Impossible. It is too unusual task set by the creators of the game in front of the hero - pilot of an experimental fighter, designed to extract the surviving invasion of alien monsters from the underground labyrinth. The problem of passage is exacerbated by four main circumstances. First, an unusual management model, something that resembles the "strike". Secondly, a rapidly ending fuel reserve that hampers the normal study of the labyrinth (only in the last mission you will get a crystal that completes a continuous race for survival.Third, any contact with the outside environment, except for landing on a flat surface, reduces the level of your protective field - sometimes small (shots of small enemies and light touching of walls), but more often fatal ("sticking" to walls and collision with the enemy) .And finally, gravity .It exacerbates the effect of the three mentioned circumstances. set, however, can save you fuel.
The main task of the first six missions is to find one of the six modules in the labyrinth and save the surviving people by delivering them to the base (the place where you start). Carefully read the descriptions of the missions. You will have to learn how to use the devices and devices mentioned there, so check at least their location. In general, it is worth re-drawing the map and mark on it such important things as fuel tanks, field restorers and other bonuses. Extra life can be found on 6 of 9 levels, but please note - it, like the bars that increase the power of weapons, does not recover after your death.
The main weapon is of three types, it can be strengthened (three times), or changed to the equivalent of another kind. There are also packets of homing missiles, 10 each. The rest of the items should be used in the right place to move up the level. By collecting six modules, you will have the opportunity to enter the underwater caves to take revenge on the evil creatures for the dead comrades. You lose information support of the base, and the base itself, and your mission is no longer a rescue, but on the contrary - to get to a big evil spin by the name ... SVIN!
On Easy it is still possible to destroy it in a dull, on Normal you have to work out some tricky tactics. Otherwise, you will not see the ending of the game, not inferior to the starting one.