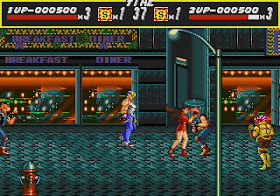 Genre: Action
Perspective: Side view
Visual: 2D scrolling
Gameplay: Beat 'em up / Brawler
Art: Anime / Manga
Published by: SEGA of America
Developed by: SEGA Enterprises Ltd.
Released: 1991
Platforms: SEGA Genesis / Mega Drive, SEGA Master System (MS)
Speaking Streets Of Rage, people present one of the most ideal games of the action genre. This game will keep you in suspense for a long time. Streets of Rage, released in 1991, became the standard for a whole generation of console fighters.

The plot is quite simple and prosaic. "A group of responsible young policemen vowed to clean the streets of the city from bandits and ...". In general, the storyline at the beginning of the game you read, I think, they are able to. However, for the genre of action - beat'em up the plot does not play a special role. It is the same as in most films of the 90s. A good policeman is knocking out nonsense from various criminal personalities and scumbags, firing ahead any weapon. Yes, we plot when, immediately on the first level you are involved in the world of fights, beating the moors and other assault. Honestly, the name for the game is suitable for 100%.
Now closer to the point. At once we have to choose one of the three heroes of the game. Of course, there is not much difference, but each character has its own characteristics: jump, strength, speed. The taste and color of friends is not, but I liked the sexy brunette of Blaze. Another choice is a powerful Axel and a black Adam. Each hero has his own style of combat, in fact, only the change of animation, but it looks very nice.

You have certainly realized that we have a hot walk through the streets filled with various kinds of hooliganism. Management is quite simple, and this is another plus of the game:
A - Special attack
B - shock
C - jump
And that's all. But this, believe me, enough to remove all that is unnecessary from the road. Perhaps a relatively small number of combos helps to concentrate on the game itself and just have fun, and not to recall the various combinations recorded somewhere on the paper to create a mega-super strike that will barely kill one enemy.
So, we have grips, jumps and the main police car with a bazooka, which can be called, if it's already quite bad. Capture is interesting in that through it you can hold not one but several receptions. But that's not all. Plus, there are various weapons: knives, bottles, pipes and a baseball bat. The last two names are especially effective. You see, the arsenal is decent. And this arsenal will come in handy against our enemies, and what is most interesting is that our enemies can also use weapons. Enemies in each of them have their own special reception. In the course of the game, the enemies will be repainted in a different color, which indicates an increase in complexity. At the end of each level, according to tradition, we are expecting a healthy boss. All games are guilty of the excessive complexity of the bosses, well, Streets Of Rage is no exception. But here we have a special attack, that is, a machine with a bazooka, which can spoil the health of the leader. I noticed another interesting fact. Upon passing the game, bosses will become common opponents, only with less health. For example: the boss from the 3rd level will wait for us at the end of the 5th. In general, the complexity is perfectly balanced.
As in all games of the genre, there is a mode for two players. However, everything is standard here. Now you can hit the enemy together, which simplifies the game and makes the process even more interesting.
In general, Streets Of Rage is an uninterrupted action movie that will keep you from beginning to end.

It's worth to make a discount on the fact that the game came out in 1991, and of course it could have been on a completely different level. Graphics at that time wonderful. Constantly changing landscapes are pleasing to the eye. Each level has its own unique design. And the characters are decorated very well. The music also did not disappoint. It seems to add an atmosphere to this militant. However, some of the cries of the heroes are frantic. But the most important thing is that the design of the game not only does not hinder the very process of the game, but also adds its own flavor to it.