Rise Out From Dungeons (MSX) 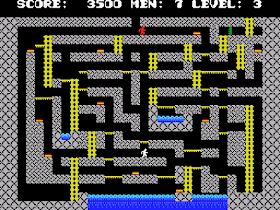 Genre: Action
Gameplay: Platform, Puzzle elements
Published by: ASCII Corporation
Developed by: ASCII Corporation
Released: 1983
Platform: MSX
A little unconventional solution in this genre. So it was instituted from the Ascii company to create games with cross genres. Although, because of the simplicity of the game design, the very genre in general can be kept silent. Another similar game, which appeared at the same time, but gained great popularity, is Lode Runner.

Features of the game process that distinguish Rise Out from similar games of the time (primarily Lode Runner):
Lack of digging pits.
The possibility of shooting left-right, for a short time removes the walls of a certain type
When falling from a height to the floor of a certain type, the character falls through it
There is water, fire and similar obstacles
There are no cross-bars on which you can crawl (and detach from them)
‹
›
Home
View web version